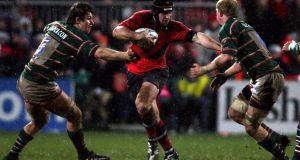 Pat Howard’s Leicester Tigers stand alone as the only English club team to defeat Munster at Thomond Park in a round six pool match (13-6) in the Heineken Champions Cup and the previous iterations of the tournament.

That match took place in January 2007 and was the last European game to be played before the redevelopment of the Limerick venue. The current Tigers head coach and former Ireland fullback Geordan Murphy was one of two try scorers. Munster qualified for the quarter-finals but were beaten by the Scarlets while Leicester made it to the final but lost to Wasps.

Since then six English clubs – Sale were twice thwarted by the Irish province during that sequence – have taken on the Thomond Park challenge and failed. On Saturday evening the Exeter Chiefs will attempt to manage something that was beyond the ken of Harlequins, Gloucester, Sale (twice), Wasps, Northampton Saints and London Irish in a sixth round pool match when they take on Johann van Graan’s in-form Munster side.

Indeed Munster are on a run of 11 straight victories in their final pool game, eight at home as well as victories over Montauban, Northampton Saints and Benetton on the road, a hugely impressive sequence of results.

Aside from the Tigers’ defeat, the only one at home, the other four defeats in this specific fixture came in the first seven years of the tournament, away to Castres (twice), Toulouse and Pontypridd. In terms of the aforementioned parameters Munster’s record is comfortably the best of the Irish provinces with 18 wins and five defeats in 23 matches, albeit that 14 have taken place in Limerick.

In contrast Leinster have played away in 16 of their 23 matches in the final pool game, winning 12, losing eight and drawing three. Leo Cullen’s team will face Wasps in the Ricoh Arena in Coventry on Sunday, the third time that the clubs have met in this fixture in the last five years.

In the 2014-2015 season the Irish province managed a 20-20 draw but the following year suffered a 51-10 thumping, their heaviest ever defeat in Europe, both matches taking place at Sunday’s venue.

Leinster might prefer to dwell on the fact that they have beaten English Premiership clubs in their last three games incorporating all European matches, restricting the opposition to 10-points or less in each match, or that Wasps have yet to win at the Ricoh in Europe this season.

The Wasps setback aside, the defending European champions have won six and drawn three in their final pool match over the past 10 seasons; their record away from home in that period – three wins, three draws and one defeat.

Over 23 campaigns Leinster have travelled to face English opposition in this fixture on nine occasions, winning four times against the Leicester Tigers, Bristol, Bath and the Exeter Chiefs and drawing two matches, against London Irish at Twickenham and Wasps.

Dai Young’s Wasps have a number of injury concerns ahead of the match, England international Joe Launchbury (hamstring) and Thomas Young (shoulder) won’t be risked unless they comes through training without any ill effects from the knocks they picked up against Bath.

Dan McFarland’s Ulster will travel to Welford Road on Saturday where Geordan Murphy’s Leicester Tigers await, hoping that they can replicate the achievement of the 2014-2015 season when the Irish province won 22-19 in Leicester in a season in which they won all six pool matches.

Ulster have played their round six game in Belfast nine times in 23 matches with an overall win record of 11 games. The latter statistic doesn’t quite reveal the full story of six of those 11 victories came away from home, beating Edinburgh Reivers, Benetton, Bath, Aironi, Castres Olympique and the Leicester Tigers.

In terms of winning in England in their final pool match, Ulster have won two (Tigers and Bath) and lost the same number (Gloucester and Wasps). McFarland will be hoping that Ulster and Ireland wing Jacob Stockdale continues his try scoring exploits. He leads the way with six tries, including a brace against Racing 92 last weekend and is the only player in the tournament to score in each of the five rounds to date.

It’s four seasons since all three Irish provinces won their round six pool matches; bridging that gap would be opportune this weekend.