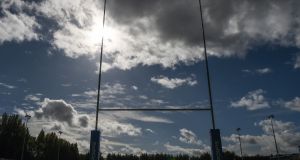 Newbridge College delivered a strong second-half performance at Templeville Road on Wednesday afternoon to get the better of St Gerard’s, Bray in the opening round of the Leinster Schools Senior Cup.

Trailing 6-5 at the break, the south Kildare men responded with tries from Jordan Nolan and replacement backrow Donough Lawlor to book their spot in the last eight for a second year in succession.

Just two minutes were gone on the clock when Gerard’s broke the deadlock in this cagey contest – Ben Watson measuring a 30-metre place-kick to perfection. Newbridge, who narrowly lost out to Gonzaga College in the semi-final of the Leinster Schools Senior League last December, were struggling to impose their attacking game and fell further behind on 12 minutes.

Shooting from an awkward angle on the right-hand side, Watson make no mistake to give Gerard’s a six-point cushion. However, their challenge was subsequently reined in by Niall Smullen’s two-time champions on the half-hour mark.

Following excellent approach work from the impressive Marcus Kiely and Sam Cahill, Donal Conroy sprinted over for an unconverted score.

Having led for almost the entirety of the opening period, Gerard’s suddenly found themselves chasing the game on the resumption. Capitalising on Jack Doyle’s sublime pass out of a ruck, flanker Nolan broke through a gap for a magnificent five-point finish.

Doyle supplied the extras to give Newbridge a 12-6 buffer on 37 minutes. Gerard’s were not prepared to go down without a fight and towering winger James Kennedy fired back with a stunning individual try.

Another Watson miss kept the gap at the bare minimum and it appeared to be anyone’s game moving into the final quarter. Yet, after Conroy was halted just shy of the Gerard’s line, Lawlor dotted down 13 minutes from time to secure Newbridge’s progression.