The 2019 Six Nations: everything you need to know 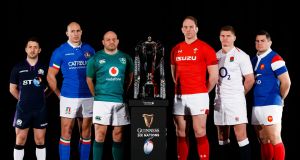 On Friday evening the Six Nations - the world’s oldest international rugby tournament - gets underway beneath the floodlights of the Stade de France.

The 2019 edition is one of the most anticipated ever, with the shadow the Rugby World Cup in Japan looming large over the championship.

Indeed, in September Ireland will pack their bags and head for the Far East with legitimate hopes of lifting the Webb Ellis Cup.

In the meantime, we’ve got far more important business to attend to, as over the next eight weeks the northern hemisphere’s finest renew acquaintances.

It’s fitting that just as the temperatures plummet outside, we are about to be treated to some rugby to warm the soul.

And before the first ball is kicked under the Parisian lights, here is everything you need to know ahead of the 2019 Six Nations.

When did it start?

The tournament was first played in 1883 as the Home Nations - with Ireland, England, Wales and Scotland participating. The addition of France made it the Five Nations in 1910, before Italy joined the party in 2000. A storied history.

Who’s won it the most?

Including all iterations of the tournament, England are just ahead of Wales as the most successful side. The full roll of honour is as follows:

Each team plays each other once - with home and away fixtures alternating each year. Teams are awarded four points for a win and two for a draw. A bonus point system was introduced in 2016 - teams receive an extra point if they score four or more tries, or if they lose by seven points or fewer.

The championship gets underway on Friday February 1st, as Wales take on France at the Stade de France. It reaches its conclusion on St Patrick’s weekend, with all six teams playing back-to-back on Saturday March 16th.

Can I watch it?

Boy can you. One of the things which ensures the Six Nations remains one of the most anticipated and romantic sporting events in the calendar is the fact every single match is free-to-air. All five weekends, all 15 fixtures, all 1,200(ish) minutes, are shown on terrestrial television. This year Virgin Media One (formerly TV3) have the rights in Ireland while the games will be split between the BBC and ITV in the UK. BBC One will show Scotland, Wales and France’s home games, while ITV will have England, Italy and Ireland’s home fixtures.

After back-to-back years of English dominance in 2016 and 2017, Ireland reclaimed the championship in emphatic style last year, securing the Grand Slam with a final round win at Twickenham. Joe Schmidt’s side beat France away in their opening fixture - courtesy of a last-gasp Johnny Sexton drop goal - before beating Italy, Scotland and Wales in Dublin. A final round 24-15 win in the London snow completed a rare Irish clean sweep.

Wales finished second with three victories from five, ahead of Scotland - who had the same record - on bonus points. France came fourth and England fifth - their worst finish since 1983. Italy had to contend with another wooden spoon.

Ireland
Joe Schmidt’s side are odds-on favourites to reclaim the title after a golden 2018 which saw them win the Grand Slam, win a summer series in Australia and then conquer the All Blacks at home in November.

England
Eddie Jones’s side seem to be at something of a crossroads with Japan looming, but finished a difficult 2018 with some strong November performances. They have also welcomed back a number of their big ball carriers - most pertinently Billy Vunipola.

Wales
Warren Gatland is heading into his final Six Nations campaign as Wales boss after 12 years in charge. Despite a number of frontline injuries - including Taulupe Faletau and Leigh Halfpenny - the Welsh have developed serious strength in depth over the past year and have won nine tests in a row.

Scotland
Scottish rugby seems to be in rude health, with two sides - Edinburgh and Glasgow - qualifying for the last-eight of the Champions Cup for the first time in history. Gregor Townsend has an exciting backline at his disposal, with the mercurial Finn Russell the orchestrator.

France
Les Bleus endured a dismal 2018 and coach Jacques Brunel has turned to youth to help resurrect a side who haven’t won the championship since 2010. Toulouse prodigy Romain Ntamack makes his international debut against Wales - the first of the successful Under-20 world champion crop to filter through into the senior ranks.

Italy
You have to go back to 2015 to find the last time Italy won a Six Nations match - and Conor O’Shea’s side will do well to end that run this time around. O’Sjea will be hoping, however, to see flashes of promise from the Azzurri’s next generation.

There are 14 referees appointed to the 15 Six Nations fixtures - with Australia’s Nic Berry the only official taking charge of more than one game.

And who’s in charge of Ireland’s five games?

Eddie Jones: “This isn’t a Six Nations squad; this is a squad to beat Ireland.”

Warren Gatland: “If we can win that first game in Paris it will give us a really good chance of winning the Six Nations.”

Gregor Townsend: “Even though we have players missing, we have other players that have played for us already or are at the level they can play well for us.”

Jacques Brunel: “The opening match of the 2018 Championship was a game of near misses and we desperately need a win in our first match to restore some confidence after a bruising 2018.”

Conor O’Shea: “Do they want me to stay on? Yes. Would I expect them to be looking at alternatives? They say they’re not but I hope they are.”

A chance to make history?

No side has won back-to-back Grand Slams in the Six Nations era - the last side to do it in the Five Nations were the French class of 1997 and 1998. Ireland seem better set than anyone to achieve the feat.

These Rugby World Cup warm-up games are a bit intense, aren’t they?