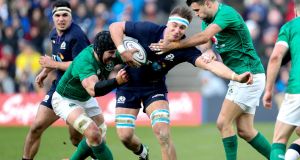 Maybe Jim Telfer is mellowing with age – after all, he’ll be 80 on St Patrick’s Day – but when the old sage speaks about the dog in Jamie Ritchie he dishes out praise for Scotland’s blindside flanker in a way he never did when talking about some of the storied backrow forwards of his coaching pomp – his 1984 Grand Slam trio of Jim Calder, David Leslie and Iain Paxton and his boys from the 1990 Slam – John Jeffrey, Finlay Calder and Derek White.

“Ritchie has this bit of . . .” says Telfer, before clenching his fist and scrunching up his face. You don’t need to be a boffin of body language to know what the great man was getting at. Ritchie is a “tough bugger”, a bit “old school”, a guy “who brings a genuine hardness, not the kid-on hardness you see sometimes. Fellas acting the big man. No. I like Ritchie. We could do with more of him.”

What Telfer was getting at is the shortage of aggression and nastiness in the Scottish pack, a softness in defence that has brought the coach, Gregor Townsend, to a decidedly tricky point in his career. Four tries conceded in defeat against Ireland in Yokohama and another four shipped in the loss to Japan that put them out of the World Cup came on the back of 17 tries conceded in the 2019 Six Nations – five in the opening half hour at Twickenham – which brought one win, one draw and three losses.

Ritchie played in the Japan game and despite the failure, he was immense. He was like an animal for work that night, making 24 tackles, winning three turnovers, carrying hard, getting involved in scraps and being singled out for praise later on by Michael Leitch, the Japan captain, who called him a proper warrior.

He missed the Ireland game in Yokohama because of a giant gash in his face sustained in Scotland’s final warm-up game against Georgia. This time last year he started against Ireland at Murrayfield and took another major dunt that required 12 stitches in his head. He still made 23 tackles and won his share of turnovers. The Scots lost, but if the rest of them did their bit as well as him then it might have been closer.

There’s not many like him, though. That’s the problem for Scotland against an Ireland team that has more classy, more canny and more hulking backrow forwards than they know what to do with.

Nobody with a respect for money will back the visitors, not with their track record of flakiness on the road and a decade-long losing run in Dublin. The job would have been brutal enough with Finn Russell in place, but his abdication makes it all the harder to see an upset. Not that there’s a white flag being raised. Far from it. The likes of Ritchie will battle to the last, a boy who will be carried out of there with his boots on and his head bleeding.

Townsend will always want to play fast and loose rugby but recent utterances from the coach suggest that the penny might be dropping on the most glaring weakness in his regime – the fatal imbalance between attack and defence. Scotland’s attack is in decent shape – but, of course, the eruption of Russell’s walkout has compromised that now – but they have been the softest of soft touches in defence. In Ireland’s last three wins over Scotland they’ve scored 11 tries, six of them in, or just after, the opening quarter.

There’s a new man running the defence now – the former Ospreys coach Steve Tandy – and there’s a new man in running the scrum – the legendary French prop, Pieter de Villiers. Townsend himself has been talking more about the need for “directness” than ever before. He’s been peppering that talk with mentions of explosiveness, work-rate and making Scotland a team that’s a “nightmare to play against”.

What he’s getting at there is the overwhelming need to bolster the defence and the reality that unless it improves dramatically then the coach is done for. The focus on what Scotland are doing without the ball has increased.

The last thing Townsend needed was grief from his star player, Russell, but that was a long time coming. The outhalf feels that the coach picks on him and makes him a scapegoat when things go wrong. His unhappiness manifested itself with a stupid breach of protocol in the bar of the team hotel a fortnight ago. Russell needs to grow up.

Townsend has the backing of his players on this one. Maybe a stronger bond will be forged in adversity and one of the chief guys he’ll be looking to is Ritchie. The 23-year-old’s back story is not all that conventional in the modern era. At the age of 12 he was ranked the second best judo player in the UK, operating out of Madras College, a comprehensive school in St Andrews. Ritchie grew up in Strathkinness, a short spin from the first tee of The Old Course.

He won a rugby scholarship at the fee-paying Strathallan in Perthshire, which is where his game developed. He was awarded his first Edinburgh contract straight out of school, started his first professional season at 17, made his first-team debut against Leinster at 18 and became a father at 19.

Ritchie tells a story about the day young Oscar came into the world. “It was December 2015 and we were playing London Irish in the Challenge Cup and this was going to be my first start for Edinburgh. My partner, Millie, was heavily pregnant but the due date was still a month away and there was no sign of anything happening so I was planning on going to London to play the game.

“On the day I was supposed to leave, she went into labour. I stayed in the hospital until 2am on Saturday but I was told the baby wasn’t coming anytime soon, so I went to sleep at 2.30am, woke up at 4am and caught the 6am flight to London. When I was on the plane, Millie phoned to say we had a baby boy. The plane took off, I played for 50 minutes in a very heavy loss and got myself back home and saw them. Myself and Millie were only kids ourselves really. It was a bit of a shock to the system while we came to terms with it. We had to grow up really quickly. We have a little girl now, Ava. Two kids at 23 is a bit unusual, but being a parent is the most amazing thing.”

Ritchie is in the vanguard of a changing team. John Barclay, Greig Laidlaw and Tommy Seymour have all retired since the World Cup and Ryan Wilson, another senior player, is out of favour. So, too, are Peter Horne and Duncan Taylor, two regulars of before.

Townsend’s championship, and his entire future as coach, is tied up now in guys like Ritchie, who bring edge and energy and the kind of bloody-minded belligerence that made an elderly man, who knows a thing or two, sit forward in his seat in his house in Galashiels and talk knowingly about ‘this lad” being made of the right stuff.

He’ll be worth watching. If there’s a rammy he’ll be in the midst of it. If Scotland come down the stretch with a chance of winning he’ll have been at the heart of the battle. It’s almost impossible to see them pulling off a shock, but if they go down it won’t be without a fight from the Scot wearing the number six - Telfer’s kind of bloke.

Tom English is the chief sports writer for BBC Scotland

1 Leinster look ready to step things up and burn off Saracens challenge
2 Keith Duggan: Surreal story of John Delaney needs to act as a wake-up call for FAI
3 Born to ride, born to win: Sam Bennett, the making of a green machine
4 Will Connors now delivering on his massive potential
5 Michael Walker: Gareth Bale’s place in Real’s history a strange type of glory
Real news has value SUBSCRIBE