Ireland out half Jonathan Sexton is fully fit and ready for his Six Nations campaign since taking over from Rory Best as team captain. 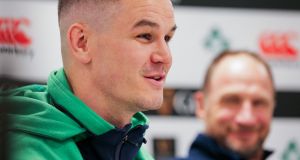 The pride and joy Johnny Sexton takes in captaining Ireland could hardly be more evident. For a player who has achieved almost everything possible in the game, you know he’s not using words for the sake of it when he says this is the ultimate honour.

It was actually somewhat surprising to discover that Sexton required all of 87 Tests for Ireland before he was appointed captain for the first and only one time thus far, namely the World Cup pool win over Russia in Kobe.

He was captain for the endgame of the Test series-deciding win over Australia in Sydney, and besides which he’s been something of a de facto leader and key decision maker for almost all his international career.

But assuming the captaincy for the 2020 Guinness Six Nations campaign and for the first time in his home city, at the Aviva Stadium against Scotland on Saturday (kick-off 4.45pm), will be a particularly special day.

“When you get a chance to lead out Ireland at the Aviva Stadium, I get emotional even talking about it now,” he admitted when facing the media at Ireland’s High Performance Centre in the Sport Ireland Campus. “Luca [Sexton’s son] will be there, my wife will be there, all my family will be there, so it’s very special. It’s about trying to channel that energy into a good performance, and a real accurate, clinical performance is what we need.”

“The pride is the same,” he added, in reference to leading the side against Russia. “Being made captain for a campaign is slightly more special than filling in for Rory [Best], but I just want to try and enjoy it as best I can, and add my bit to it, try and make a difference for however long I’m in the role.

“It’s not something that I take lightly. It’s obviously a massive privilege and honour, but I can’t let it bog me down, either. I’ve got to try and be myself and just learn from past experiences of doing it.”

In that regard, captaining Leinster for the last season and a half should help, not least in his dealings with referees. He is certainly at ease in front of the cameras and the media, and much like Ronan O’Gara, as well as being honest in his answers, he allows himself a moment of thought after each question.

So it was that Sexton wouldn’t be drawn too much on what constituted a good Six Nations for Ireland.

“We haven’t spoken about it,” he revealed, which, when you think about it, is no surprise. “We just spoke about the first game. Success for us on Saturday is to get a win at home against Scotland. In the Six Nations, you have to win your home games.

“Even if you are going to go a tiny bit bigger and say [win] the first two games – although we haven’t spoken about the second game – but if you can win those home games, it will put you in a good position for a one-off game in Twickenham and then back to another two.

“It’s exciting but you can’t look too far ahead in this competition, otherwise it will bite you in the arse. It’s all about this weekend and we have prepared like that. If we can do the business, we will have to regroup on Monday and go again.”

Less than ideally, Sexton hasn’t played since injuring his knee during Leinster’s win in Northampton on December 7th, meaning this will be his first game in eight weeks.

However, one of the advantages of being 34 is that Sexton has long since learned about his own body and how to mind it. Always on course to be fit for this Six Nations opener, he has previously also proven his ability to return to the Test arena after lengthy absences, notably when he was stood down by a French doctor for 10 weeks during his second season with Racing in 2014-15.

After missing Ireland’s opening Six Nations win in Rome, Sexton returned for the 18-11 victory over France at home with a masterful all-round kicking performance, landing five penalties from five and picking up the man of the match award after surviving two bloodied collisions with Mathieu Bastareaud. Ireland went on to retain the title.

“I’ve done it a couple of times. It’s obviously more difficult and you’d be lying if you suggested it’s ideal, but I can draw on past experiences of coming in having not played, even when you talk about just before the World Cup, having not played for a while,” said Sexton, in reference to only playing the last of Ireland’s warm-up games before the tournament.

“The way we’ve trained over the 10 days will hopefully help me. I’ve built into the team stuff and probably felt sharper today [Thursday], having made a few mistakes on Tuesday and having felt a bit rusty at the start of the week.”

A change in set-up is as good as a rest and, aside from being reinvigorated by the captaincy, a new tournament and a new training base, Sexton admitted: “It feels new. Obviously, with the new coaches, the way we’ve set the week is totally different in terms of how we run things. So, yeah, it’s been new, it’s been fresh and it’s been good. The fresh faces have come in and given us a lot of energy.”

As for the changes to Ireland’s game which have been introduced by a new coaching ticket, Sexton said: “There are a few differences but obviously I can’t go into them because I can’t tell Scotland our game plan. But I hope that you get to see it on Saturday.

“Sometimes you can prepare to play a brilliant expansive game and if you don’t get the right set-piece and get first-phase ball, or get put under pressure, it can disintegrate.

“So we have just got to be ready for all eventualities and we will try our best to put out the new style of game we have been working on. It could take a while, it might not appear in this campaign or this game, or it could all come to fruition on Saturday. No one knows. Let’s see how the game goes.”

Ireland’s new captain seems to be in a good place.