Confident Catt says no big egos a big plus for Ireland 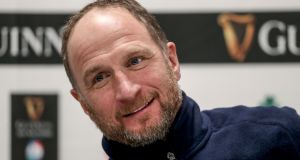 Ireland attack coach Mike Catt: “As a group of coaches we are expecting some good stuff on the weekend.” Photograph: Dan Sheridan/Inpho

Mike Catt marches into the media room at the National Indoor Arena. “Good afternoon all,” chimes a thick South African accent barely dulled by 28 years living in his mother’s land.

Bath, England, became Catt’s home for 76 Test matches, spanning 13 years and two World Cup finals, which could have been a third if not for Jonah Lomu. The 48-year-old is long past the Cape Town experience of 1995, but it remains one of rugby’s iconic images.

“I know a little but not a huge amount,” says Jordan Larmour, when asked about his newest mentor’s playing career.

“He’s an open and honest guy,” Larmour replied as a more talkative version of himself under microphones. “He’s a good character to have around, full of energy, and you can have a bit of craic with him. When it is all rugby he’s focused and we are serious. He has brought a few new things in that, hopefully, we can implement on the weekend.”

That mix of South African and English rugby traits could be misinterpreted as arrogance, but such a theory dissolves when he is asked about differences in the Ireland squad from other groups of men he has worked with since his Port Elizabeth school days.

“No egos,” said Catt. “In other teams I’ve played in and coached there have always been big egos. So you have a perception from the outside and then you come into it, and I must admit I’ve been very impressed with the group of players. There is no time to have this ego or to be above your station. The environment that Andy produces will make sure none of that happens.”

The wonder is if Catt’s attacking philosophy can possibly be visible amidst Saturday’s promise of swirling winds after just two weeks’ pitch work in Abbotstown and Portugal?

“It’s how we want them to attack. Andy has a philosophy. I think a lot of it is trying to complement what the provinces do. You are not going to be able to change them overnight. It’s about being realistic about how certain squads do certain things, and then us jumping on the back of it.

“It’s about the players bringing their skills to the way Andy wants them to play.”

Loud and clear: this is Andy Farrell’s masterplan.

How did Catt perceive the group before he became their coach?

“There we go, there we go,” he smiles and winks, before circling back to the previous answer.

The easy assumption has Stuart Lancaster’s attacking systems at Leinster – which Lancaster recently stated was the same philosophy held by Farrell and Catt – being replicated by Ireland.

“I didn’t say Leinster. I said all the provinces.”

Such spikiness is more playful than serious, but the question remains: can the best elements of the provinces in the Champions Cup reappear on a Six Nations afternoon?

“Of course it can. Yeah. You still got to catch and kick and pass under pressure. Europe is just a step below international rugby.

“We got a lot of experience in the side. A lot of guys have been through a lot. There are players who want to right a few wrongs.

“As a group of coaches we are expecting some good stuff on the weekend. If it’s on to kick, you kick, if it’s on to run, you run.”

Catt talks a very simple game, but Larmour confirms that a lot was “thrown at the players” in Portugal last week. That’s nothing new to this group.

“They are very humble guys, extremely hard working and there is a willingness to learn. No egos.”

And Mike Catt has seen a few.