Liam Toland: Is Farrell ready for what the athletic Doris can do?

Gerry Thornley and Gavin Cummiskey look ahead to Ireland's first match of the 2020 Six Nations against Scotland and predict a change in style of play under new head coach Andy Farrell. 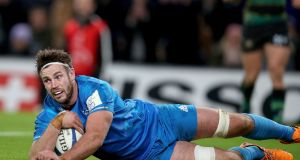 Caelan Doris: he will have serious cool composure right beside him in Conor Murray. Photograph: Bryan Keane/Inpho

The frustration with youth? First they jump, and only then do they grow wings. Is this a problem? In a Six Nations competition with almost no experimentation but for injury, retirement or when playing Italy, the starting 23 players will be exactly the same. The one exception may be the floating number 23. So, doing what the French have done in recent weeks will not give Ireland a reward this Six Nations.

Similar to Ireland’s top golfers being automatically tops in world golf, ditto for Leinster players. If you can make the Leinster team, well then you’re ready for Ireland. But being ready and slotting in seamlessly are different matters.

Hence, Conor Murray’s correct selection, starting at nine on Saturday with a first capper Caelan Doris starting at eight. Wow, Doris will have serious Lions Test cool composure right beside him guiding him along.

For all John Cooney’s form I’m sure Doris is pleased Murray is there. Is Doris ready? Yes, but he creates a challenge.

A challenge: is Andy Farrell ready? Not as a coach, but is he ready for what Doris et al can do.

Or is that not what attracted Farrell to Doris in the first instance. Because flanked to Doris is a Lions Test player in CJ Stander, who has been for far too long corralled into a cattle crush of one out running into brick walls. Over time this Irish one out carrying infected his game in Munster, and a player with more began to give less in order to be exactly in the place required of him.

So, how does Farrell value the ball?

I bemoan statistics eulogising 24 carries for 23m gained. Yes, there are times when a forward has no choice but to bail out a back and take the hit, but far too many of our forwards have been selected for this exact outcome, and in fact have built international careers on same.

Remember neither Keith Earls nor Jacob Stockdale scored a try in Rugby World Cup 19. This must end. And, yes, we love to see a big smash where our player gains supremacy, but for what end?

I opined recently that Doris can do what players like Jack O’Donoghue can but at this stage O’Donoghue can’t do what Doris (or Max Deegan) can, and this is no reflection of O’Donoghue’s skillset but the Munster environment he’s playing in.

Take 2018 Pro 14 Players’ Player of the Season Tadhg Beirne and you’ll easily spot the drastic difference in his game between the Scarlets and Munster/Ireland. Different levels, yes, but different games?

Irish rugby doesn’t have to swing wildly away from its core principles of the successful last decade but it does need to swing.

Explanations of the World Cup have been far from satisfactory where “margins” were the core reason. Yes, margins will always impact a one-off match; weather, referee, luck, injuries, bounce of the ball, etc, but not over 32 years of World Cups. Otherwise we are extremely unlucky and Australia extremely lucky having won the World Cup twice.

Hence, there are other reasons for Ireland’s struggle going way beyond margins.

And I wonder once more is Farrell ready to explore these reasons where selecting a footballing No 8 is but the start; footballers make mistakes, but the rewards are huge – think world-class All-Black Kieran Read! Why not Doris as he has the athleticism and skill to mimic Read?

Farrell released his team sheet early; a nod towards loosening overwhelming controls that typified the previous culture. He also ambled about meeting the press in advance of the team announcement. Small symbols of a system change? Yes. Clearly the past informing the present where friction grated the conduit between team and supporters.

So how do we judge Farrell? One way is results, but I’ll leave that to you as three home wins and two away “performances” with changing culture is a huge return.

Take a player like Stuart McCloskey. He is clearly a huge player in every aspect, but has looked satisfied by his lot in Ulster. Until recently his Ulster selection didn’t take much effort, where his ability far outshone Ulster’s with far more required to make it into Ireland. Can Farrell inject and engender a new vigour in McCloskey that will get him competing and loving the top level?

The old regime appeared to jettison players like McCloskey who didn’t fit into the mould required (ditto Simon Zebo), and many more appeared bit part-players because they wouldn’t do what they were told. To them add John Cooney.

Love comes in a variety of guises where a release of the pressure valve may achieve far more allied to a broadening game plan, meaningful counter-attack and shifting players like Stander out of the cattle crush into places the Scots least like to see him, ie running at Adam Hastings.

Stander is not the most skilled player in Saturday’s backrow but in the six jersey will thrive running over backs! Out in lush grass is where Stander, Doris and all our players, young and old, can make mistakes and ultimately grow their World Cup 2023 wings.

Finally, spare a thought for a legend of our game who is being laid to rest. Tighthead Tom Forde won a Munster Senior School’s Cup with Crescent Comprehensive in 1983, and went on to live and breathe Corinthians RFC and Connacht rugby for many, many years.