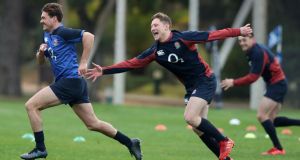 George Furbank will win his first cap in England’s Six Nations opener against France on Sunday with Eddie Jones handing the Northampton fullback the No 15 jersey. Furbank has been selected to fill the void left by Anthony Watson’s late withdrawal with Elliot Daly moving to the wing.

As reported by the Guardian on Thursday, Furbank has edged out Ollie Thorley - another uncapped contender to replace Watson - and caps a fine season with Northampton with his Test bow at the Stade de France. Elsewhere, Charlie Ewels is a surprise selection in the secondrow, coming in for Courtney Lawes, who shifts to blindside flanker.

Mako Vunipola is absent with Joe Marler coming in to start at loosehead. Vunipola was forced to sit out training earlier this week with an eye problem and has not made the 23-man squad with Ellis Genge on the replacements bench.

Elsewhere, Tom Curry has been charged with filling the void at No8 left by the injured Billy Vunipola with Jones selecting 12 players from the side who started the World Cup final. Jones has again selected George Ford and his captain Owen Farrell as his 10-12 axis with Manu Tuilagi outside them despite the head coach’s claim in the aftermath of the Rugby World Cup final defeat that he ought to have selected Henry Slade in place of the Leicester outhalf. With Slade missing with an ankle injury, Jones’s hand was somewhat forced.

Ben Youngs keeps his place at scrumhalf despite a disappointing performance in the Rugby World Cup final with Jonny May joining Daly on the wing. Jones’s decision to shift Daly to the wing is a significant one because Thorley would have been the like for like replacement for Watson, who was withdrawn on Thursday with a calf injury, had the head coach wanted to keep the Saracen at fullback. Instead it appears his future now lies on the wing.

The Bath tighthead prop Will Stuart is in line for a debut off the bench, having been preferred to Harry Williams as back-up to Kyle Sinckler. He is joined among the replacements by Luke Cowan-Dickie, who has rejoined the squad, having flown home for family reasons to provide cover for Jamie George. George Kruis, Lewis Ludlam, Willi Heinz, Ollie Devoto and Jonathan Joseph are also among the replacements, meaning Thorley and Mako Vunipola are the two players cut from the 25-man squad announced on Thursday.

Jones had already promised his side would bring a “brutal physicality” against the youthful opponents and while France’s team manager Raphael Ibanez hit back on Thursday, claiming “it’s easier to talk about it when you know you’ll be in the stands,” the England head coach reiterated his message on Friday. “France can expect absolute brutality from England,” he said. “We are going to go out there to make sure they understand what Test rugby is. It is about being brutal, it is about being physical and it is about dominating the set piece.”