Is it time for Georgia to replace Italy in the Six Nations?

Manager’s contract ends after 2020 Six Nations, but so far he has not spurred growth 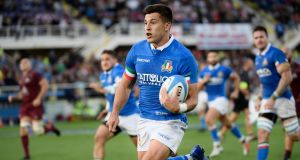 Italy’s fly half Tommaso Allan runs on his way to score a try during their international rugby union test match against Georgia in Florence last November. Photograph: Filippo Monteforte/AFP/Getty Images

Mere mention of Michael Bradley provides a reminder of uncomplicated amateur rugby days. Bradley was Ireland’s scrumhalf more often than not from the 1985 Triple Crown until the 1995 World Cup. Reappearing as Connacht coach, after a stint in Georgia, he currently runs Zebre for Conor O’Shea.

“For those who know and work within the rugby circles, there is no question that the direction is the correct direction and the work is being done and the foundations are in place and it is ready to move forward,” Bradley assured RTÉ despite overwhelming evidence that O’Shea’s Italian project has stalled.

“I go back to the Irish system 15, 20 years ago when one or two decisions had to be made then everything will fall into line. Until they are made it will stay as it is.”

In the meantime, annual calls for Rome to be replaced by a weekend in Tbilisi get drowned out despite superficial reasoning which demands Georgia’s entry into the Six Nations.

The obvious reason that nothing will change is the original five nations have no intention of swapping spring evenings in the Eternal City with biannual visits to the crossroads between Europe and Asia.

Current world rankings lend credence to Georgia being the tier-two nation capable of making the great leap onto rugby’s top table – an open invitation Italy have repeatedly failed to accept for two decades – with the Georgians ranked 12th to Italy’s 15th. Sleeping giants of the sport, USA and Tonga, separate them on this unreliable list.

When they crossed paths in Florence last November, Italy ran out 28-17 victors. It begs the question, why are Georgia officially considered the superior outfit?

This is cleanly proven by a quick review of both countries’ opposition and results since February 2017. During this period Georgia have faced two tier-one nations – both in 2017 – losing narrowly to Wales (13-6) and well beaten by Argentina (45-19).

Italy have struggled to develop, despite O’Shea’s restructuring track record at Harlequins, despite 19 tier one test matches in the same time. Despite running Scotland close last year, losing 29-27, results have been consistently humiliating.

He changed direction before finishing the sentence.

“We need to develop this game and we want to play a part in that.”

Presuming O’Shea is only able to keep Italy top of the tier-two rabble, his time in charge can be viewed as a qualified success. Certainly, Georgia’s higher ranking does not stack up on closer inspection. Their results since February 2017 against tier-two (that’s including Spain, Germany and Belgium) opponents has yielded 18 victories but, tellingly, three defeats in 2018 to Italy, Japan and Fiji, while Romania caught them two years ago (8-7).

Italy under O’Shea have beaten Fiji and Japan while also losing to both teams.

“When Georgia lose a few key players they struggle with depth,” said McWilliams, despite almost every French Top 14 club having a heavyweight Georgian prop or lock on their roster. “Italy right now are better than Georgia.”

“It was a fundamental victory for this group,” said O’Shea.

Perspective remains vital when reviewing Italy’s right to remain in the Six Nations. What’s abundantly clear is they are unable to keep pace with serious rugby nations. What’s also evident is Georgia will never improve without increased exposure to the same tier-one teams. They share a pool at RWC 2019 with Australia, Wales and Fiji, so progress would be a surprise. Italy are cursed with eight days between South Africa in Shizuoka and New Zealand in Tokyo.

The reality of professional sport is it is high-performance driven. You have to accept that

O’Shea’s four-year contract ends after the 2020 Six Nations. The federation want him to stay. He is undecided. Despite catching Allister Coetzee’s hapless Springboks in November 2016, his time in charge has failed to produce obvious growth.

O’Shea remains adamant that success and Italian rugby will only become bedfellows after 10 years of endeavour and clever management.

“It was four years ago now I spent some time with the Philly Eagles,” he said last year. “Ten years before they were one [win] in 12, then five in seven, and now they are Superbowl champions.”

There is a major problem his old mentor Steve Aboud has yet to solve: the lack of rugby in schools means natural athletes are entering the representative system largely unskilled and untrained as teenagers. No team can build foundations in that scenario. And yet, O’Shea guarantees positive change is visible beneath the surface. That Treviso have won eight and drawn one of 15 Pro14 games this season does signify progress. Zebre, under Bradley, are bottom of Conference A with three wins.

When asked to reveal the “one or two decisions” Italian rugby must make, the Cork man replied: “The reality of professional sport is it is high-performance driven. You have to accept that and then you have to come up with your solution for high performance and then you have to strive to achieve that. That to me is the key decision that needs to be made. It takes time.

“As long as time is given Conor will achieve it.”

What exactly all this means is unclear. Bradley did highlight improved results by underage Italian teams “due to the work Stevie [Aboud] has done” and that “player numbers are very positive”. He spoke about a need to “streamline” the system like the Irish provinces do from under-15.

That appears the nub of the issue.