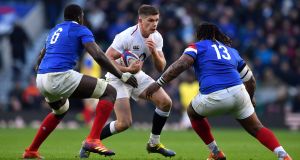 The toll booths were removed from the Severn Bridge two months ago, but granting a free ride to English rugby teams in Cardiff will never catch on. It explains why the Six Nations retains its passion and lustre, in defiance of societal changes and Britain’s shifting political sands. The desire to make England pay for the perceived crime of being English is always strongest on days like this, regardless of the championship table.

To describe it as just another game of rugby also blithely ignores history, both ancient and modern. Wales are unbeaten in their last 11 Tests while England, having re-found their attacking mojo with 10 tries against Ireland and France, have not felt so buoyant in some time. In the event of Principality Stadium success, both sides will fancy completing a grand slam. There has not been a more eagerly-anticipated Gavin and Stacey “derby” since the 2015 Rugby World Cup.

England had high hopes of winning on that dramatic day, as they did in 2013 before Wales stormed home 30-3. If recent results have tipped more in England’s favour, the margins have been slender: Sam Underhill’s match-saving tackle on Scott Williams proved the difference last year, and Elliot Daly’s 76th-minute try swung the last meeting in Cardiff in 2017. Wales could easily have won both matches with slightly more luck and composure.

There are few reasons to imagine Wales folding meekly this time, either. Partly that is because they never do in Cardiff under Warren Gatland and Shaun Edwards, both of whom will be moving on at the end of this year. In the shape of Alun Wyn Jones, Ken Owens, Justin Tipuric, Jonathan Davies, George North and Liam Williams they also possess half a dozen gnarled Lions who know precisely what mindset these huge contests demand. Ignore Wales’s moderate form in their opening two away wins against France and Italy; they are very different beasts at home.

There is also an argument that England have been almost too good so far this month and, as a result, have scarcely been tested in certain key areas. Cutting a feeble-minded France to ribbons with superfast ball and smart tactical kicking is one thing, but neither Ireland nor Les Bleus put them under any great stress beneath the high ball nor asked many sustained attacking questions.

Wales have certainly picked a team to go at England, with the two Gareths – Davies and Anscombe – offering pace and initiative at halfback. Add in a smart midfield and plenty of nuisance value at the breakdown and the hosts are equipped, at least in theory, to examine how comfortable England are on the back foot. Without Mako Vunipola and Maro Itoje, there are two fewer world-class opponents with whom to grapple, while Jonathan Joseph, a persistent thorn in Welsh sides, is not around either.

Then there is the South African referee, Jaco Peyper, last seen opting not to penalise Owen Farrell for a no-arms shoulder hit on Wallaby forward Izack Rodda at Twickenham in November.

Farrell has been on best behaviour since the turn of the year, but the massed Welsh choirs inside the Principality Stadium can be relied upon to make a lot of noise should he tackle a home player even fractionally north of the belly button. So much of what England are now about revolves around Farrell, yet to put a toenail wrong this month. If anyone exemplifies England’s rebooted attitude over the past few months it is their outhalf, captain and head-tilting goalkicker; few are still talking about the critical absence of Dylan Hartley’s leadership skills.

Since Farrell has taken up residence at number 10 with a well-balanced centre pairing outside him, it is as if a mental handbrake has been released on England’s previously spluttering chariot. If they are beaten in Cardiff, fair enough, but fear of the big occasion will not be the cause. This England clearly believe that, having won 32-20 in Dublin and scored four tries in doing so, they can win anywhere.

Not that Farrell is exuding even a flicker of arrogance on the eve of his side’s last big competitive away day before they head to the World Cup in Japan in September. To his eyes England still have a good distance to travel, their evolution far from over. “I don’t think we are anywhere near where we want to be. Everyone has talked over the past two weeks about our kicking game and what that has created. Your kicking game is only effective if there is space. And that space is only there if you are a threat with ball in hand.”

England have started their past two games outstandingly; allow them to do so again and Gatland’s men will have a major problem

England’s key objective, in short, will be to keep making the right tactical decisions about when and where to strike with maximum effect. Might this be the day to invite Billy Vunipola and Manu Tuilagi, relatively under-used to date, to make early inroads, rather than kicking hopefully towards Williams, one of the world’s more dangerous counter-attackers? Wales would not be averse to a madcap contest of thrills and spills; England, ideally, would prefer to establish some set-piece control and play off the back of that. “Games like this, big games, are usually about doing the simple things well, not trying to pull a rabbit out of a hat,” said Farrell.

The onus, then, is on Wales to try and get under England’s skin and fracture their composure. England have started their past two games outstandingly; allow them to do so again and Gatland’s men will have a major problem. Should the hymns, the anthems, the fireworks and the regimental goat not combine to unnerve England, the host nation will have to find another way. Expect pressure to be poured on both English halfbacks and the young Sale openside Tom Curry; Edwards, in particular, is a past master at discomforting hitherto solid opposition defences.

How he and Gatland would dearly love to wipe that familiar half-smile off Eddie Jones’s lips and send him back over the bridge to think again. If not, with home games against Italy and an injury-hit Scotland to come, a third English Six Nations title under Jones in four seasons will loom. Assuming England stay as cool, calm and collected as they have been lately and keep 15 players on the pitch, it will require something more than Celtic fire and brimstone to halt them. – Guardian