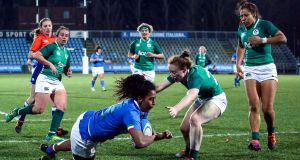 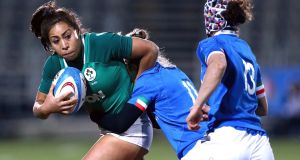 Ireland fell to a second defeat in the Women’s Six Nations Championship at the end of an absorbing battle with Italy in Parma on Saturday evening.

Despite coming away with two bonus points – Eimear Considine (two), Anna Caplice and Laura Sheehan all crossing the whitewash – Adam Griggs’s side were ultimately squeezed out by the determined hosts.

Desperate to secure their very first win over the Irish at this grade, Italy stormed into an early 10-point lead. After Michela Sillari split the posts off a third-minute penalty, Giada Franco offloaded to Aura Muzzo for a converted try.

While Considine superbly gathered Nicole Fowley’s crossfield pass to touch down on the right flank, Granco grabbed a second Italian try on 14 minutes. However, either side of a Fowley penalty, Considine and Caplice conjured five-pointers to turn the tie on its head.

This looked like being enough to give Ireland an interval buffer, until Sofia Stefan pounced to bring the sides back on level terms (22-22).

Following a superb Muzzo carry 10 minutes after the restart, Franco was released for her second try of the night. A Silari conversion moved Italy within sight of a famous victory, before Ireland gave themselves a potential lifeline in the final quarter.

Another precise Fowley kick provided the platform for Sheehan to ground on her Six Nations debut. Even though the subsequent bonus strike by Fowley was wide of the mark, Ireland remained in the hunt for a second win in succession.

It wasn’t to be, however, as Italy held out for a thoroughly-deserved triumph.