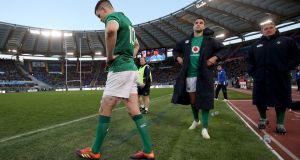 Ireland’s Jonathan Sexton along with Conor Murray and Tadhg Furlong after the Six Nations game against Italy in Rome. Photograph: Dan Sheridan/Inpho

Johnny Sexton has admitted that he’s not the only Ireland player feeling frustrated with the side’s failure to find the right rhythm in this year’s Six Nations championship as they build towards the World Cup later in the year.

Television pictures showed Sexton was fuming as he left the Stadio Olimpico pitch in Sunday’s 26-16 victory over Italy and speaking to Virgin Media One for an interview to be aired at 7.40am on Wednesday morning’s Ireland AM, Sexton explained his mood is one shared by team-mates.

“No one cares more than us, that’s the bottom line. I’m sorry if I let my frustrations boil over at times but that’s part of me and I care a lot about the team and wanting to do well.

“You don’t always get it right, but that’s part of the job. When you care about it, you can let it boil over.

“There have been moments where I could have been better, but again you’re so interdependent on the team being good and I said that all along last year .”

“We just have to say that we haven’t been good enough yet, we’ve shown glimpses in games of how good we can be, and then, just, we haven’t. A good example [of how things can change] would be Wales. Poor in the first two games and then exploded against England. The differences between playing good and having a bad game are so small.

“We said it when we were winning and you guys [the media] just think we’re throwing out the punch lines, the ‘margins’ and all that. But it’s not. They’re generally true and it’s something that we believed in.

“We had a little bit of luck along the way last year to achieve the Grand Slam. Probably didn’t get the bounce of those balls against England and now we’re trying to find that sort of performance that we need to revive us again and get us going.”

One thing Sexton did rule out for a loss of form is Joe Schmidt’s departure after the World Cup in Japan.

“That’s not the reason, it’s not a distraction really. We’ll talk about Joe for years to come but for the minute it’s just been business as usual. Little things haven’t gone our way and we’re working incredibly hard to put it right.”