Busy Robbie Henshaw unlikely to cut back on his screen time 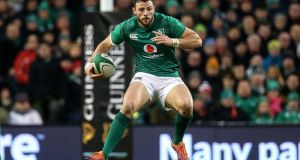 Robbie Henshaw: “It’s nice when it does work out and everyone gets their detail perfected. The perfect example is the try that Jacob Stockdale scored away to Scotland.” Photograph:Gary Carr/Inpho

During Irish camp Robbie Henshaw can spend up to five hours a day in front of a screen, and that’s before he even gets to go through his Geography and Economics slides.

Study goes on the back burner during the Six Nations, the Leinster and Ireland back simply can’t be in two places at once. This week he’s to sit his mid-terms in UCD, only he can’t because he’s at a training camp in Belfast. Three years down and with only one semester to go, he’ll reschedule and get through it, as he always does. But for now he has plenty of rugby study to focus on.

“I would say I’m spending at least one hour a day in front of a screen, not including meetings,” the Athlone native explains to The Irish Times. “You have your own video analysis room in Leinster and in Ireland for the players. And even when you're at home we have an app called Hudl - we have to log on and have a look at it in the evenings so yeah it's pretty constant.

“To give you a brief synopsis on what we do in Carton House - every team meeting that we have consists of video footage, every backs and forwards meeting we have consists of video footage. Each meeting will last between 30 minutes and one hour - and on average there would be two to three meetings per day. Especially Thursday and Friday. So it's a lot of time spent in front of a screen, but I suppose the importance of it goes a long way and I think every team is doing it but it probably gives you that bit of an edge on the opposition if you do it well.”

In Ireland’s first match of the Six Nations against England, Henshaw returned to the position he played most of his rugby in before breaking into the Irish senior setup in 2013.

“Obviously there's definitely a difference in analysis when you're changing position - so moving back to fullback there's a variety in your plays and new lines of running that you have to learn off. As well as looking at the opposition kickers, so the 10 and the nine and how they kick and what their favourite type of kick is and the side they kick off and to. And the length of the nine’s box kicks. So yeah there’s a lot of different analysis between centre and fullback.

That’s a lot of blue light 👓

The 25-year-old explains that analysis would generally consist of a review of training, a review of games and then a preview of oppositions, your opposite number. And of course going over your plays:

“We have a box set of plays and you'd look at why you'd run a certain one. What part of their defence you want to exploit and what part of their attack you want to break down. We’d look at the analysis and the footage and then go outside and walk through it with the ball in hand - so it's not just visual but you have to go and do it afterwards so it's cementing it in your head then.

"It's nice when it does work out and everyone gets their detail perfected. The perfect example is the try that Jacob Stockdale scored away to Scotland where that was a move that we'd practised during the week and an area that we'd highlighted we could go after.

“In Leinster the plays change week-in week-out because we play so many games and you don't want to show opposition teams the same plays all the time. Because a lot of other teams would study our stuff. The key for us is to change things up so that we aren't one dimensional. But it can be challenging because you wouldn't know everything off by heart so you always need to just keep an eye on them and keep making sure you're on top of your detail.”

As well as being in his final semester of an Arts degree in Geography and Economics at UCD, two years ago Henshaw began his first business venture as a director and third shareholder of Henshaw Eyewear. Inspired by his own experiences, they provide sunglasses and specifically designed ‘blue-block’ glasses to deflect the blue light given off by screens.

“I'm always trying to play catchup with the study so yeah it's just a lot of going home and going through lesson slides at night. Being honest, I do a lot of cramming towards the end of semesters too as I can't attend many of the lectures. Just the sheer amount of hours that you're putting in to rugby and camp and things like that, and travelling away to games it always tough and this is definitely the most challenging time.

“With all the time in front of the screen I was suffering from eye strain, and my eyes were getting itchy and dry. Particularly at night, because your body clock wants to shut down when the sun goes down and I was wondering why I was having bad sleep. Now I put on my glasses around seven or eight at night and I definitely have seen an improvement.

“So because of my own experiences I am very interested in the area of eye health, but I also wanted to tip my toe in the water of a venture and it's evolved nicely, we are selling now in 80 opticians around the country. It’s great to be able to go from the pitch and go from a rugby set up into a business set up. And go into meetings, and listen to what happens and be involved in conference calls and things like that, basically the real world. It definitely gives me a stepping stone into life after rugby and I'm pretty privileged to have that opportunity.

“I'm enjoying the challenge but I can't get too carried away because obviously the main job is rugby and my job is to focus on staying fit and getting back on the pitch and putting in good performances. I'm still struggling a little bit with a dead leg, which is very frustrating because I picked it up in training which isn't ideal. But I’m hoping to be back for the France game.”

Robbie Henshaw is an ambassador for the national sight loss agency and his blue-block glasses can be ordered at www.henshaweyewear.com