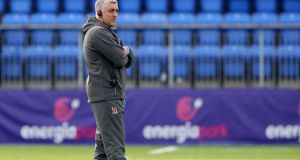 Kieran Campbell has succeeded Noel McNamara as head coach to the Ireland under-20 team. The 41-year-old former Ireland scrumhalf will discharge the new role in conjunction with his position as Ulster Academy manager with responsibility for the elite player development pathway in the province. Denis Leamy joins the backroom team as defence coach.

McNamara will return to his position as Leinster rugby academy manager following a hugely successful stint in charge of the Irish 20s over the past three seasons, not just in terms of results but the manner in which his teams played - a bold, expansive style with players encouraged to take ownership on the pitch.

When the previous incumbent Nigel Carolan stepped down after the 2017 Six Nations, Munster’s Peter Malone acted as interim head coach for the World Junior Championship in Georgia that summer – he was in charge of the forwards at the time and was assisted by Campbell for that tournament – a year after Carolan had led the national team to the 20s World Cup Final.

McNamara was appointed for the 2018 Six Nations and the Clare native subsequently led Ireland to a Grand Slam in the 2019 Six Nations and they were unbeaten again in 2020, winning all three games against Scotland, England and Wales before the coronavirus pandemic forced the tournament to be initially postponed and eventually cancelled.

Campbell was assistant coach to McNamara for the three seasons with responsibility for defence, but will now switch to attack along with the overall duties. Collie Tucker, who joined the set-up ahead of last season’s Six Nations will stay on as forwards’ coach while Leamy has been added to the ticket.

An Elite Player Development officer with Leinster since October 2019, Leamy was an outstanding player who won 57 caps for Ireland primarily as a flanker from 2004-2011, playing in two World Cups and he was part of teams that won a couple of Triple Crowns and the 2009 Six Nations Grand Slam under then head coach Declan Kidney.

The 39-year-old made 144 appearances for Munster and was a member of the 2006 and 2008 Heineken Cup winning sides. A hip injury forced him to retire early (30). His coaching career included working with Rockwell College, Garryowen and Cashel, Munster underage sides and, in 2016, he was part of the Tipperary backroom team that helped the county to win the All-Ireland senior hurling title.

Confirmation is expected this week that this season’s under-20 Six Nations will be postponed until possibly the summer. The likelihood is that there will be no World Junior Championship in 2021 and that the Six Nations or a version of that tournament will take its place in June or July.