February 23rd, 2021: Ireland rugby captain Johnny Sexton is focusing on the immediate future having admitted that he may not still be playing by the next World Cup, which is due to be held in 2023, when the Leinster outhalf will be 38. Video: VOTN 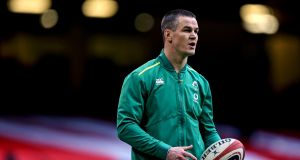 Johnny Sexton has hinted that his career might end before the 2023 Rugby World Cup. Photograph: Tommy Dickson/Inpho

Johnny Sexton has dropped the clearest hint yet that negotiations with the IRFU and Leinster regarding a new one-year deal are all but complete, while at the same time revealing that whenever his career does end he is not of a mind to step into coaching or punditry.

“Ehm, nearly yeah. Nearly, nearly, nearly,” he repeated, as he cautiously chose to find the correct words when asked about his contractual position. “Nearly there yeah, but waiting to see if Leinster want to keep me around.”

Pausing for a moment, he then added with a wry smile: “They have a few good young ‘10s’ coming through.”

In truth, the 2018 World Player of the Year appears to be less bullish about his chances of playing through to the 2023 World Cup in France than he had been previously.

Discussing how the squad have analysed “missed opportunities to put the ball in space” in the defeats by Wales and France, Sexton said: “The coaches have come in, they’ve done a fantastic job. It’s very different from what it was before but we will be better for this going forward, of that I am convinced.”

Unprompted, he added: “When we talk about World Cup cycles, I might not be a part of the full cycle but this group will definitely be better for this type of coaching and structures.”

However, in all of this, Sexton insisted his own views hadn’t changed, more that the narrative had been led by others.

“No. If you look at what I have said it has been other people who have thrown fuel on the fire, Isa [Nacewa] telling people I could play until I am 40/41. I have always been of the same position. I absolutely love what I do and I am very privileged to do it and I am still loving it and I will keep playing for now.

“That has never changed, I have spoken of my admiration for athletes who have stayed at the top of their game for a long time but [we need to be] careful about what I said and what someone said, that can get lost a bit.

“But for the moment, I would hope that my team-mates and coaches see how motivated I am to train well every day and then to keep going. Whenever that is, I can’t say because no one knows.

“You could be 24/25 years of age and get an injury and you are finished then. At the moment, I am contracted for this season and nearly contracted for next season. Hopefully stay and we’ll see what happens.”

Asked whether he might go into coaching or punditry after his playing career does end, Sexton smiled wryly again and said: “None of the above. I have a fair idea what I will be doing. Yeah, you never tell anyone your plans because they can change can’t they? But, no, I’ve got some things that I will work towards over the next year or two years, whatever, I don’t know.

“I will work towards getting into the real world and starting another life. There are certain parts of this game that are amazing and that you love, and that you would love to be a part of it forever. But then there are some parts that you just can’t wait to get a million miles away from it,” he added, a fortnight after a French doctor made outrageous claims in the public domain which he subsequently clarified with an apology.

“I love it at the moment, I am loving every moment of playing and I just want to focus on this campaign and then, if I stay on next year, just focus on that and try and make the most of whatever is left.”

Confirming that he returned to training fully at last week’s two-day get-together, the Irish captain said that the “chopping and changing in training really adds to training because guys are competing with each other and fighting for places.”

Sexton also refuted the notion that the team needed a win this Saturday against Italy in the Stadio Olimpico to restore confidence.

“Starting the campaign is a million miles away from what we wanted; we wanted two wins from two. Obviously going down to 14 early against Wales is one thing but we took a lot of confidence from that game in terms of what we did with 14 men and some of the chances we created.”

Repeating his belief that confidence has remained intact, he added: “It certainly didn’t feel like that [confidence had dropped] at training today. I think we are all looking forward to trying to finish this campaign on a high. A lot can happen. I don’t think mathematically it is over. Maybe it is, we haven’t really focused on that; we just want to focus what is in front of us and then target the one after that, and finish on a high.”

Led in large part by Andy Farrell and Mike Catt, better decision making in identifying space has become the dominant theme since the French game, albeit in tandem with Catt signalling out the centres and outside backs to better convey information to the halves, this has come dangerously close to publicly placing the blame on the players.

Even so, when asked how one encourages players to talk more if it is not in their nature, Sexton admitted: “It’s a very good question. It’s something that we work a lot on.

“I think in Leinster especially we have a very, very quiet group, just by nature,” he added, while describing them as “amazing players”.

Citing how the outside backs with the All Blacks feed in information, Sexton said: “We had Graham Henry in with Leinster and he told us that with Wayne Smith and the coaches there about how they cue an action so that the guys in the outside channels are responsible for seeing the space and then cueing the right call to get the ball into that space.

“It’s a team thing and something that we’re massively working on,” Sexton added in reference to the Irish squad.

“It probably hasn’t come to fruition for 80 minutes. We’ve done it at times but, again, international rugby is about doing it for 80 minutes really, and I think that’s the next step for us.”

Envoi Allen settling in well after move to Henry de Bromhead’s yard 19:11
Schumacher name gives me motivation every day, says Mick 16:46
Andy Farrell doesn’t know yet if he’ll be with Lions or Ireland this summer 15:46
Gordon Elliott hearing to start at 9.30am on Friday 13:45
Weary England’s batting woes continue as India take control 13:33
Crossword Get access to over 6,000 interactive crosswords