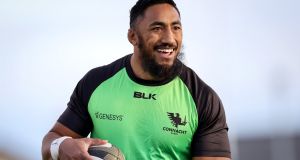 Bundee Aki, for so long a spiritual leader on the pitch for Connacht, has been temporarily silenced in training this season.

The vocal and energetic Ireland centre was asked to stay quiet at sessions earlier in the year to enable Connacht coaches to monitor the response from other players.

“We recognised, as a lot of teams did, that without the crowds, there was a need to create energy within the group and Bundee was a massive part of that for us, and it was celebrated and everyone fed off that.”

However, when Aki was asked to stay quiet, the energy levels dropped considerably, he says.

“As the season has progressed, there has been a realisation that, firstly a lot of people do need to pick up the slack if he’s there or not, and that you can still celebrate the good moments and generate that energy we need to gain momentum, but without necessarily being heard three suburbs away.”

There were other ways to create that energy, he said, like Jack Carty who is direct and demanding of his peers.

“You get energy from that, a positivity and a momentum surge – it doesn’t necessarily have to be about the decibel levels.”

Aki, he says, showed real control against Cardiff that “empowered those around him”.

Although the Italian outfit sit bottom of Conference B without a win, Wilkins says there is a potential pitfall in expecting to win this round 13 game.

“We are taking nothing for granted,” he says. “There is already a natural focus and awareness of its potential as a banana skin. Part of that is because we have come off a tough game with a short turnaround, so that has immediately focused the mind.”

Although it is a game Connacht should win, they recognise Benetton as an attacking threat, he says.

“If the game gets loose, they can punish you. The wins haven’t been great for Benetton, but statistically speaking, they have done enough to win.”

Not taking this fixture lightly, he says it would be “criminal” not to build on the momentum generated from the Cardiff result, which was the start of the final block of five.

Every one is a must-win, and “every game is a cup game”, he says.

“It might sound easy to say, but it’s actually literal in this sense. If it does go down as the competition is expected to at the moment, there is only the one conference winner that goes through to a final. We are trying to hunt Munster down,so every game is a must-win and the bonus points are an important part of that.”

Connacht report no fresh injuries from Saturday’s win, but Wilkins, who is hoping to extend his contract at the Sportsground, expects some changes, “without compromising the momentum and form” against Cardiff.

“Not wholesale changes for the sake of it, but there were guys who were banging on the door who are fresh and ready to go, so I would expect some changes.”