Gerry Thornley: Ireland must not underestimate inventive and ambitious Italy

For Andy Farrell’s side it’s a must-win, but Italy’s young guns could seize the moment 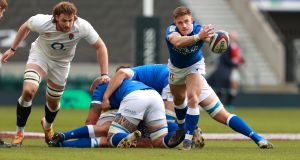 Stephen Varney of Italy passes the ball during the Guinness Six Nations match between England and Italy at Twickenham on February 13th. Photograph: David Rogers/Getty Images

Ireland will be in familiar if also conflicting territory at the Stadio Olimpico next Saturday, ie both no-win and must-win. Anything less than a victory, and a fairly convincing one at that, will be deemed below par against opponents whom they have beaten 10 times in a row and who have lost their last 29 Six Nations matches in succession.

Yet there’s been enough evidence in the two rounds so far to suggest that in some aspects of their attacking game Italy have been more inventive and ambitious than Ireland.

As well as missed tackles, there have been system errors, such as seven players bunched on a blindside with not one opposing player in view for France’s first try in the fifth minute in the opening game in Rome.

There has been much to admire in two entertaining contests against the pair of pre-tournament favourites. We probably shouldn’t be surprised by this

“It kills me seeing that,” admitted one-time Azzurri Ian McKinley. Or when Antoine Dupont chipped into an unguarded in-goal area for the try by Gaël Fickou.

There’s also been the recurring sight of Paolo Garbisi aimlessly hoofing the ball downfield, but this is clearly a pre-ordained tactic. While they’ve been applauded for not box-kicking, in actual fact Italy would be better off if scrumhalf Stephen Varney did box kick rather than have Garbisi kicking the ball from 15 metres behind the gain line.

But there has been much to admire in two entertaining contests against the pair of pre-tournament favourites. We probably shouldn’t be surprised by this.

Franco Smith, an outhalf-cum-centre in his playing days, won nine caps for the Springboks (his full debut was against Ireland in the Battle of Pretoria in 1998), and his first foray into coaching was as the backs coach of the Cheetahs in 2006 before his stints as head coach of Benetton and the Cheetahs. The Azzurri backs coach is Alessandro Troncon, the sixth-most capped Italian player of all time and their first to reach 100 caps.

Smith has invested in youth, most obviously at halfback in the 19-year-old, Welsh-born Varney and the 20-year-old Garbisi. Varney, whose maternal grandparents are both Italian, has represented Italy at Under-18 and Under-20 levels, and when Smith afforded him his debut against Scotland in Florence last November, he’d started just six games for Gloucester.

When Varney’s former Under-20 halfback partner Garbisi made his try-scoring debut against Ireland last November, he’d played just three games for Benetton. Like him, another 20-year-old, full-back Jacopo Trulla, has played more games for Italy than for Zebre, having also made his debut against Scotland in Florence.

Varney (who’s played 80 and 75 minutes) has taken to Test rugby seamlessly. He is a dangerous, sniping runner around the fringes, with good footwork and an offloading game. His blindside snipe, when leaving both Cyril Baille and Antoine Dupont for dust with deft dummies before putting Monty Ioane (who looks a real find) away, would have been one of the plays of the tournament but for the TMO deeming his pass had been slightly forward.

The one-off runners come hard onto Varney’s popped passes and he also mixes his game up nicely, witness the chip off a ruck in the middle of the pitch against France for Ioane to gather on the full.

Garbisi likes to vary his passing game with some inside passes, often to blindside wingers ghosting onto the ball from deep, but, like Varney, he can make a break, as he showed when stepping Paul Willemse and leaving Gregory Alldritt behind him.

In the two rounds so far the Azzurri have scored more tries than Ireland (3-2), and made both more line breaks (11-8) and offloads (13-8), while they’ve also been quicker to move to the ball to their wingers.

But it isn’t just those bare statistics.

Ireland have engineered some hard-earned turnovers against Wales and France on the opposition throw or in the tackle area, be it on or off the ground. However, they have made little use of this possession to date, with no clear signs of a coherent strategy when it comes to transitioning from defence to attack.

By contrast, Italy have tried to seize the moment, striking within two phases of a turnover against France when the young halves Carlo Canna and Trulla moved the ball wide to Luca Sperandio and he chipped and gathered to score a sweet try from long range.

If the 15-13 against France possibly flattered Ireland slightly, the scorelines haven’t been particularly fair on the Azzurri

In the second half at Twickenham, after a good counter-ruck on their own 22 earned a turnover, Varney fed Garbisi and he cross-kicked perfectly for Ioane to gather on the full in a pitch-length break-out which led to three points.

They also come alive with penalty advantages, as was the case in the third minute at Twickenham when the impressive 22-year-old number 8 Michele Lamaro (who was forced off but will be fit to face Ireland) popped the ball off the deck back to Varney and sharp hands by Garbisi and Trulla enabled Ioane to finish out wide.

They also have some strike moves, as when the 20-year-old replacement Federico Mori took a hard line onto Varney’s pass off a scrum and offloaded for the supporting Tommaso Allan, a relative veteran at 27, to score their second try at Twickenham.

If the 15-13 against France possibly flattered Ireland slightly, the scorelines haven’t been particularly fair on the Azzurri. Aside from Ioane’s disallowed try against France, Jonny May knocked-on in the build-up to England’s first try, but worse still was Anthony Watson’s intercept try in the 49th minute when Italy were 11-20 down and attacking.

The TMO Joy Neville alerted Mike Adamson’s attention to the late hit by Owen Farrell (his frustration high after being told off for his involvement in an after-the-whistle kerfuffle and two knock-ons) which had flattened Varney a couple of phases beforehand.

Incredibly, Adamson decreed that as the hit was not head to head but rather “chest to chest”, it did not constitute foul play. Romain Poite agreed, but this rather overlooked the hit being late, needless and “chest to back” in blindsiding Varney. The officials did not cover themselves in glory there.

It was ever thus for Italy, but these young Azzurri are an enterprising lot.

PS: Last year the Lansdowne rugby players organised the ‘Swim 4 Tash’ and raised €25,000 for “Arc Cancer Support Centres”. As Tash’s second anniversary approaches, her daughter Jemima is doing the ‘Swim 4 Tash 2’ on her own, swimming every day in the Irish Sea for the month of February to raise much needed funds for ARC. Read her bio here and follow her journey on Instagram @Jemima105 or on Facebook @Kieran J Mulligan.

Ken Early: Klopp all at sea as Liverpool continue to flounder 06:00
Angling Notes: Leading fly-casting instructor Glenda Powell casts her wisdom 06:00
Benefits of sport far outweigh the Covid risks so why are kids still not playing? 06:00
Weakened Leinster and Munster likely to face off in Pro14 final 06:15
International Women’s Day: How basketball gave Ruthie Bolton her brilliant voice 06:00
Crossword Get access to over 6,000 interactive crosswords