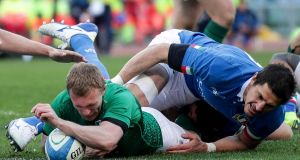 Keith Earls goes over for Ireland’s third try in the 2019 Six Nations game against Italy at the Stadio Olimpico in Rome. Photograph: Billy Stickland/Inpho

Keith Earls and Denis Hickie share the cumulative record of eight tries for Ireland players in internationals against Italy and the Munster wing will be hoping to improve on the tally if he is selected for Saturday’s match at the Stadio Olimpico.

Earls scored a brace in a 2011 World Cup match in Dunedin, one in 2012, another in 2015 and then in recent years has proved a consistent nemesis for the Italians, grabbing two in a Six Nations game at the Stadio Olimpico (2017) and crossing for one in both the 2018 and 2019 tournaments.

Hickie’s tally included four in a World Cup warm-up match in Thomond Park, while his final two tries for his country were scored at the Stadio Flaminio in a 2007 Six Nations game. Irish players have also scored recent hat-tricks against the Italians, coincidentally in the same game, a 2017 Six Nations match at the Stadio Olimpico.

Number eight CJ Stander enjoyed an excellent afternoon in the Roman sunshine while Ulster wing Craig Gilroy’s achievement was bittersweet in some respects. He scored his three tries having come on as a replacement but that day, to date, marked the last of his 10 caps in the green jersey.

Despite losing heavily to France and England in their first two matches, 20-year-old Italian fullback Jacopo Trulla retained a positive outlook ahead of Saturday’s game against Ireland.

“We started by focusing on ourselves with the aim of increasing our confidence on the pitch. In the last game we had a proactive attitude and in several moments of the match we showed who we really are.

“We know that it is not enough. As a group we have grown a lot. There is great harmony between us. We have all the credentials and the qualities to change the trend of the latest results. We want to become a winning team and to do so we need to keep working hard.”

Ghiraldini gives shout out to 2013

The recently retired Italian captain and hooker Leonardo Ghiraldini had no doubt about his favourite campaign in the national team jersey as he recalled in an interview with Paul Eddison. “The Six Nations I remember most is 2013 when we won the first game against France. The atmosphere for that game was unbelievable because when we were singing the anthem there were all the former Italian players close to us.

“That Six Nations was a really good for us. We were really close to winning in England; to do that at Twickenham against England was amazing. After that, we won against Ireland in the last match of the Six Nations.”

The players of the Ireland and Scotland teams had to double up as stewards during a Five Nations match between Ireland and Scotland in Dublin. With 40,000 packed into Lansdowne Road to watch the match, players had to join the the Garda Síochána in forcing spectators back off the pitch, an exercise repeated several times during the match.

The Irish team had gone into the game on foot of wins over France and England but succumbed to three late tries in a 16-7 defeat. Ireland’s try scorer was the celebrated Jack ‘Joxer’ Arigho (16 caps), a wing who two years earlier has set an Irish scoring record when crossing for five in three matches in the Five Nations. He missed the Scotland game that year through injury.

Arigho was a member of the Lansdowne team that won five successive Leinster Senior Cups (1927-1931), three Bateman Cups in a row, captained the club and also wrote a “lively and entertaining column in the Sunday Press”.

In 31 Test matches between Ireland and Italy, the Italians have prevailed on four occasions but only once in the Six Nations Championship, a 22-15 victory in Rome (2013).

To be competitive at this level, we will have to be intense throughout the game.

– Italy head coach Franco Smith underlines one characteristic that will be required if his team hope to topple Ireland in Rome on Saturday afternoon.

Ken Early: Klopp all at sea as Liverpool continue to flounder 06:00
Angling Notes: Leading fly-casting instructor Glenda Powell casts her wisdom 06:00
Benefits of sport far outweigh the Covid risks so why are kids still not playing? 06:00
Weakened Leinster and Munster likely to face off in Pro14 final 06:15
International Women’s Day: How basketball gave Ruthie Bolton her brilliant voice 06:00
Crossword Get access to over 6,000 interactive crosswords