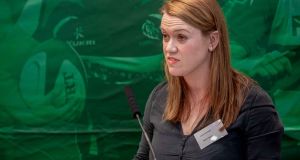 Cantwell and her family will move from London to Cape Town with Irish rugby’s most capped (86) female expected to fill a role similar to Anthony Eddy’s in the IRFU.

Eddy is director of rugby for Ireland sevens, male and female, but the Australian also oversees the entire women’s programme. The Springboks believe they have “lured” a prized asset from the northern hemisphere ahead of this year’s World Cup in New Zealand.

“If we’re serious about women’s rugby – and we are – we had to make a serious appointment, and we have,” said Jurie Roux, SA Rugby chief executive.

“Lynne comes on board at a time when we have committed to growing the game amongst women – a directive from World Rugby and a South African national imperative – and she will work closely with Rassie Erassmus (director of rugby), Charles Wessels (general manager) and Springboks head coach Stanley Raubenheimer to improve the women’s game in South Africa.”

Cantwell, who has been a member of Sport Ireland’s board since 2019, brings a wealth of experience to the role. “Globally women’s rugby has been recognised as the strategic growth area for the game where it is experiencing rapid transformation as a result of World Rugby’s focus,” she said.

“At SA Rugby, we are committed to progress but recognise the work that needs to be done to repair and rebuild in order to move forward. “I think the women’s rugby community in South Africa has a unique identity and strength, with a bright future. I look forward to working with everyone to designing an environment that allows South African women’s talent to thrive.

“I am intensely motivated to progress women’s rugby and women’s involvement in rugby, and the backing at leadership level from Jurie, Rassie and Charels was central to my decision to join the team.”

Erasmus added: “We have a rugby department and had a manager for women’s rugby, and we had done as much as we knew but we realised we lacked expertise and experience in women’s high performance area.

“We refocused our approach and we’re very glad and excited to be able to bring someone with Lynne’s experience and skills into the South African environment.

“We’re realistic about the fact that the short term impact might not be all that obvious in results but I have no doubt that the skills transfer and long term impact will be a massive benefit to women’s rugby in South Africa.”