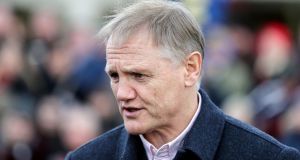 Joe Schmidt has suggested a biennial Test match between between the winners of the Six Nations and the Rugby Championship. Photograph: Laszlo Geczo/Inpho

Joe Schmidt has suggested a “biennial” north versus south Test match to decide the number one team on the planet.

The 54-year-old New Zealander, who retired from coaching last year, also predicts a significant drop in player salaries in the coming seasons.

“I think an aligned global calendar has to come at some stage,” said Schmidt. “One of the problems with that is . . . everybody has a position that they want to protect. The Six Nations is ring-fenced because it is the financial engine that drives professional rugby at Test match level in the northern hemisphere.

The Six Nations and Sanzaar are currently in discussions to streamline international and club fixtures in order to create a sustainable financial model for the game.

“Even if it was biennially, [to become] a global Test match champion, I think it would be a better indicator of the best team than the World Cup which is such a small glimpse, whoever is best on the day,” said Schmidt. “This would have a little more credence on the world rankings that everyone finds a little hard to understand.”

On the financial impact expected for players due to the Covid-19 shutdown, Schmidt added: “Certainly in the short-term, some of the player contracts won’t be what they were in the past . . . I know they are talking about in the Premiership. They are certainly talking about it in France.

“So, if everyone obeys those salary caps, it may not be as lucrative for the player as it once was, but it will still be quite lucrative.”

Schmidt was speaking on the premise that the 2020 Six Nations and other competitions will be completed between August and November but the promise of a second surge of the coronavirus may destroy these plans. The hope is to resume on August 22nd, with Leinster versus Munster at an empty Aviva stadium, but there is growing lobbying of both UK and Irish governments to reduce social distancing measures to one metre and allow fans to attend matches later this year.

“One metre social distancing rule does not make a lot of sense as it would lead to a lot of transmission,” said Professor Tomás Ryan, associate professor in the School of Biochemistry and Immunology at Trinity College.

“If we don’t have elimination I don’t see how we can have any large sporting events in Croke Park or Lansdowne road with crowds. Too many people together shouting is the perfect environment for a super spreader event.

“And if we do get to elimination we are not going to open corridors with countries – be it France, UK, Italy – that do not.

“But I think we are heading for a surge anyway,” continued Prof Ryan, who is part of a group of 1,000 infectious disease and other medical experts to sign a letter calling for a significant change in the current Government policy by using the New Zealand and South Korea methods of eliminating the virus from the island of Ireland.

IRFU chief executive Philip Browne is on record stating the return of supporters to stadiums is essential for Irish rugby’s financial recovery.

“The argument [against ‘crushing the curve’] is schizophrenic because people who argue [to reopen] the economy are doing the worst thing for the economy.”

Packed out stadiums are expected in Dunedin and Auckland this weekend as professional rugby returns to New Zealand after the country went almost three weeks without a new case.

An immediate barrier to Ireland replicating New Zealand is a separate health policy in Northern Ireland and a lack of testing or quarantine for those arriving into Dublin airport.

“We don’t have elimination in Ireland, we have suppression, but anyone who says we cannot achieve elimination is absolutely wrong,” said Ryan. “The question is can we maintain it?

“At the moment, in my opinion, we are jumping off a cliff. If we get our act together in terms of face masks and testing, which we are not doing, we can have sports but you cannot have crowds watching them.

“That’s the best case scenario until we have a vaccine.

“What we are doing now is pretending we are going to do a South Korean style [test, trace and isolate system] but we are just going to go back into lockdown whenever we need to.”

When does Professor Ryan and colleagues expect the predicted surge to reappear?

“We didn’t see second surges in Japan and South Korea because they were spikes not surges as their testing infrastructure suppressed them.”