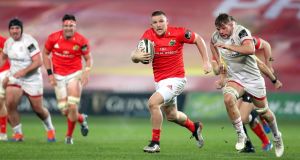 Munster’s Andrew Conway on his way to scoring a try against Ulster at Thomond Park. Photograph: Dan Sheridan/Inpho

This European tune-up exhibited flaws and promise in equal measure.

Munster never got around to the bonus-point fourth try but they had Ulster’s number in most departments. They even made more handling errors than the visitors, which was some feat in itself.

“We turned the ball over in contact too much, not handling errors,” corrected Ulster coach Dan McFarland. “Not passing errors, just in the bang and bash of contact.

“I felt if we held on to the ball we were threatening enough to be able to cause them problems. The classic example was going through the middle of them in the first half and immediately losing the ball when going to ground. You just can’t do that at this level.”

McFarland was presumably referring to the returning Marty Moore’s charge being abruptly ended by CJ Stander slapping possession out of the prop’s paw (Stander was astonishingly effective considering his workload since those 22 carries into massive Samoans on October 12th).

The upside, or downside depending on your perspective, was the sight of Andrew Conway burning up the grass like Jacob Stockdale used to do way back in 2018.

On a night for the heavies, Munster’s pack included five Cork natives and three South Africans while Ulster had no home-grown players up front. Sam Carter should become a Ravenhill favourite though, as the 30-year-old Wallaby lock immediately grasped the interpro nettle.

The same cannot be said of the other internationals wearing white. With 12 weeks until Scotland arrive for the Six Nations, Ireland coaches Andy Farrell and John Fogarty journeyed down to Limerick. Nobody new put their hand up.

Ulster’s pack of Leinster exiles – five starters in the forwards; Jack McGrath, Marty Moore, Alan O’Connor, Jordi Murphy and Nick Timoney – must shoulder the majority of responsibility for this defeat.

When Munster turned up the heat they were unable to cope.

Johann van Graan ripped a page from the Springbok manual by naming six forwards and only two backs on the bench for the third time this season.

“It might be something we will do again,” said the Munster coach. “A few teams are going that way. As a coach do you want to replace a lock or outside back? With the load of the game currently – like you saw tonight – the scrum, the lineout, the maul is massive so as a coach you got to make a decision, cover for the backs or put on a forward. Most teams will put on a forward.”

So, with no other outhalves currently available, Bleyendaal is the man once again. The former New Zealand under-20 had Munster 15-6 clear at the break due to some nifty distribution allowing Rory Scannell to slide over for the second try.

Plenty of players picked up where they left off in Japan. The first touch down was claimed by Stander when the seemingly unbreakable number eight powered over Murphy on 14 minutes. The opportunity arose when Stockdale duffed a clearance kick into Chris Farrell and Scannell emptied Faddes into touch. The score came off the resulting lineout platform.

Conor Murray was lying in wait but Alby Mathewson seems far too valuable a commodity for Munster to release in the coming weeks (his contract is up). The former All Black scrumhalf carried and directed to play with expert precision, especially leading up to Stander’s try.

Ulster had started the season well – despite conceding 63 points to the Cheetahs in Bloemfontein – but on this evidence Angus Curtis is not the answer at outhalf. However, McFarland is lucky that John Cooney is harnessing his non-selection by Joe Schmidt in a positive manner.

The contest was motoring along in predictable fashion until Rob Herring peeled off a lineout maul nine minutes into the second half to easily break the clutches of Bleyendaal. Cooney’s conversion made it 15-13.

Cooney put Ulster ahead on 57 minutes with a true strike from wide on the left.

A comedy of errors – Mike Haley and Liam Coombes in particular – gave the Dubliner a chance to extend the lead further but his long-range penalty from wide on the right was well short.

That’s when the crowd offered their collective opinion. Conway heard them. A clever inside pass by Bleyendaal – presumably from the Stephen Larkham bag of tricks – saw Conway evade Carter and sprint away from Faddes for a glorious try.

Order restored, but this performance will not be enough to secure victory over the Ospreys in Swansea on Saturday while Ulster will be hoping Bath are unable to recall Francois Louw and Sam Underhill ahead of their visit to The Rec. Or at least welcome back their Springbok Marcell Coetzee. They badly missed him.

The never-ending season continues at a brisk pace.