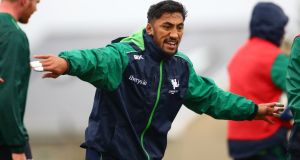 Bundee Aki: returns to the Connacht line-up for the visit or Montpellier to the Sportsground. Photograph: James Crombie/Inpho

Contrasting sides with similar aspirations, the interest of both Connacht and Montpellier in the Champions Cup this season could be determined by the outcome of tomorrow’s opening fixture at the Sportsground in Galway (1pm).

Connacht, having dropped to third place in the Pro14 Conference B after their humbling at the hands of Leinster last week, have ambitions for a quarter-final, while Montpellier, who finished sixth in the Top14 last season to claim the last berth in the Champions Cup, sit mid-table alongside Toulouse, both with 19 points.

Certainly Connacht have no easy game in this Pool Five with Toulouse and Gloucester to follow. But having taken two years to qualify for Champions Cup rugby since dropping to the Challenge Cup in Pat Lam’s final year in charge, Connacht will be keen to consolidate their position.

However, they must do so without some key frontline players, most notably two experienced backs in Tiernan O’Halloran and Kieran Marmion, who share the honours for having scored the most tries for Connacht in this competition, while up front, heavyweights Paddy McAllister, Finlay Bealham, Quinn Roux, Gavin Thornbury and Sean O’Brien remain unavailable.

On the plus side Bundee Aki returns after international duty, and will be partnered by Kyle Godwin, while the experienced Matt Healy is named on the left wing. Lock Ultan Dillane has recovered from a back injury to partner youngster Cillian Gallagher, while in the back row Colby Fainga’a is named at openside, with Eoghan Masterson covering the second row from the bench.

It is not how Friend would have liked to open his first Champions Cup campaign, particularly against a hugely physical Montpellier side, which features seven internationals in the starting XV – six in the pack – in addition to the Du Plessis brothers, Bismarck and Jannie, on the bench, while former All Black outhalf Aaron Cruden will be directing operations in the backs.

That is serious beef which Connacht must withstand, but Friend hopes his game plan to avoid as much confrontation as possible, will instead test Montpellier’s fitness, while Conancht’s execution must be clinical an effective.

“If we get into an arm-wrestle, we are in strife, so we need to avoid it.” says Friend. “ There will be some set-piece battles and I back our scrum to handle that, and our maul, but they are not the areas we want to play in, so we want to move them around and get them chasing.”

With a limited bench, it is the perfect time, says Friend, for his senior players to lead.

“You want those experienced players to step up at a time we need it, and I have every confidence they will do that.”

The Sportsground faithful will add to the occasion but if there is a home game where Connacht need to be fully tuned in, this is it.Having worked their socks off last season to qualify, the stage does not get any bigger this season.

1 Betting shops face uncertain future as they prepare for Monday reopening
2 Tianna Bartoletta: ‘After you’ve gotten your medal, you become black in America again’
3 Sideline Cut: Marcus Rashford proves himself a leading man off the pitch also
4 NFL admits league should have listened earlier to players protesting
5 Ian O’Riordan: An education in race and running during college days in America
Real news has value SUBSCRIBE