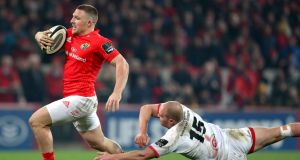 Munster’s Andrew Conway gets past Ulster’s Matt Faddes on his way to scoring his side’s third try during the Guinness Pro 14 game at Thomond Park. Photograph: Dan Sheridan/Inpho

Munster are currently heading into the Champions Cup with one established outhalf after JJ Hanrahan joined Joey Carbery on the injury list after Saturday’s interpro victory over Ulster at Thomond Park.

Tyler Bleyendaal, who is now Irish qualified, was called into action on 29 minutes of this Pro 14 encounter when Hanrahan was forced off with a suspected hamstring tear after Ulster’s Kiwi fullback Matt Faddes caught him just about legally after a midfield break.

“It looks like a hammy,” said Munster coach Johann van Graan. “Straight away after that late hit our doctor said he’s got to come off. We will scan the hamstring on Monday and know more then.

“Obviously it is a big concern for us with Joey out as well.”

Van Graan did not rule out adding a foreign outhalf to their European roster.

“Possibly. Rory Scannell can cover 10 as well. He has played at 10 for Munster before. He is a very good goal kicker.

“The next option is Ben Healy [the Ireland under-20s outhalf] which would be exciting if we need to swap him in. That’s currently our options. Worse case scenario we have a few nines who can play 10, like Neil Cronin. ”

This European tune-up showed flaws and promise in fairly equal measure. Munster never got around to the bonus-point fourth try but they had Ulster’s number in most departments.

They even made more handling errors than them, which was some feat in itself.

Both groups have a week to discover the cure for a World Cup hangover.

The upside, or downside depending on your perspective, was the sight of Andrew Conway continuing to rip open defences like Jacob Stockdale was able to do way back in 2018.

But first, some provincial derby facts and figures to warm the toes.

On a night for the heavies – an old school approach being the new winning blueprint – Munster’s pack included five Cork natives and three South Africans while Ulster had zero homegrown players up front. Sam Carter should become a Ravenhill favourite though, as the 30-year-old Wallaby lock immediately grasped the interpro nettle.

The same cannot be said of the other internationals wearing white. With 12 weeks until the Six Nations, Irish coaches Andy Farrell and John Fogarty came down to Limerick for a look. CJ Stander and Peter O’Mahony, on this evidence, remain central to their plans. The rest is anyone’s guess.

Speaking of the blueprint, Van Graan ripped a page from his beloved Springbok manual by naming a six forwards and two backs split on the bench.

Risky business when the injury prone Bleyendaal is charged with covering numerous slots but the former New Zealand under-20 had Munster 15-6 clear at the break with some nifty distribution allowing Rory Scannell to slide over for their second try.

Plenty of players picked up where they left off in Japan. The first touch down was claimed by Stander when the seemingly unbreakable number eight powered over Jordi Murphy on 14 minutes. The opportunity arose when Stockdale duffed a clearance kick into Chris Farrell to allow Scannell to empty Faddes into touch.

Conor Murray was lying in wait but Alby Mathewson seems far too valuable a commodity for Munster to release in the coming weeks. The former All Black scrumhalf carried and directed to play with expert precision, especially leading up to Stander’s try.

Ulster had started the season well – despite conceding 63 points to the Cheetahs in Bloemfontein – but Angus Curtis does not look like the answer at outhalf.

However, it was their pack of Leinster exiles – five starters in the forwards; Jack McGrath, Marty Moore, Alan O’Connor, Murphy and Nick Timoney – that must shoulder the majority of responsibility for this defeat. When Munster turned up the heat they were unable to cope.

The contest was motoring along in predictable fashion until Rob Herring peeled off a lineout maul, easily breaking the clutches of Bleyendaal nine minutes into the second half. John Cooney’s conversion made it 15-13.

Cooney put Ulster ahead on 57 minutes when his range was true from wide on the left.

A comedy of errors – Mike Haley and Gavin Coombes in particular – gave Cooney a chance to extend the lead but his 50-metre penalty effort was well short.

That’s when the crowd offered their collective opinion.

Andrew Conway heard them. A clever inside pass by Bleyendaal – presumably from the Stephen Larkham bag of tricks – saw Conway evade Carter before sprinting away from Faddes for a glorious score.

Order restored, but this performance will not be enough to secure victory against the Ospreys in Swansea while Ulster will be hoping Bath are unable to recall Francois Louw and Sam Underhill ahead of their visit to The Rec next Saturday.

“We turned the ball over in contact too much,” conceded Ulster coach Dan McFarland. “We can’t do that at this level.”

The never ending season continues at a brisk pace.

1 Owen Doyle: Creeping professionalism of schools rugby a threat to the game
2 Niall Quinn happy to step into the breach at FAI
3 Coco Gauff pulls off biggest shock yet by beating Naomi Osaka
4 GAA officials and referees brace themselves as new rules kick in, and this time it's for real
5 Wolves left to rue profligacy as Liverpool roll on
Real news has value SUBSCRIBE