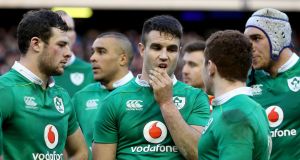 Watching Conor Murray has never been so grim, and still his performance was sprinkled with enough moments of brilliance to keep the faith.

Follow the victorious scrumhalf and see how any game unfolds. All the secrets can be discovered in his movements, his instinctive decision-making or just how tall he stands at the final whistle.

The last image at Murrayfield was Greig Laidlaw looking every one of his 176 centimetres.

Murray proved a peripheral figure when this baffling affair entered the meltdown moments. But in the aftermath, Joe Schmidt exonerated his most valuable player of any wrongdoing.

“Especially in the first half, there were a lot of bodies on the floor and it did make it very hard,” said Schmidt. “Conor was reaching over and the ball was slow.”

Scotland never bothered to target Murray; instead, they slopped all over his ball.

The winning of this match was in Scotland’s dominance at the breakdown, coupled with the scope Finn Russell was granted to find his Glasgow pal Stuart Hogg. Scottish eyes can tell you that Rory Best’s pack got blown away in those opening 20 minutes. 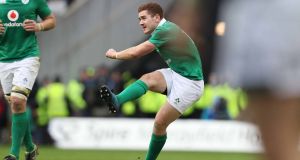 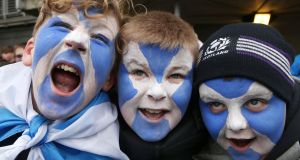 “Kick coming!” yelled Hogg as Murray stooped on 15 minutes. The supposed targeting of his standing leg, as unveiled by Glasgow last month, proved a bluff. Murray was granted time to punt and Hogg owned the aerial ball over Simon Zebo.

Only one time was Hogg enveloped – by Russell, of all people – and the ball spilled loose.

This was a Scottish weekend in every arena. Gregor Townsend filleted Ronan O’Gara when the incoming Scotland coach simply retweeted the Racing man’s pre-match utterances on RTÉ about hoping that “Ireland hammer them because of the way Scotland behaved during the week. Too mouthy, but they can’t back it up. We were brought up on the fact that you work hard and then talk afterwards.”

Unless, that is, you are paid to talk beforehand. As O’Gara spoke, Mr Mouthy (Greig Laidlaw) was introducing the Gray brothers – who combined for an astonishing 50 tackles – to a chatty Princess Anne.

Laidlaw’s penalties ultimately separated the sides, not unlike O’Gara slating the English before delivering at Welford Road way back when.

On 20 minutes, Murray was covering the left touchline as Russell fed Huw Jones, who put Hogg dashing away from Keith Earls, down the right wing, for the second Scottish try.

A Murray error will always be microscoped. On 27 minutes, as Ireland bashed their way back into the contest, Murray tossed a pass, meant for Zebo, into Rob Kearney’s midriff. The resulting Scottish period of pressure resulted in Alex Dunbar, a centre, sneaking into the lineout and ghosting between Tadhg Furlong and Rory Best for the third Scottish try.

Murray still sparkled, as in those seconds before half-time when he knocked the ball loose from Dunbar to allow Zebo swing the pendulum 80 metres; or his duck and dive for the try line on 47 minutes, after which Iain Henderson went over from the next pick and crash.

Heaslip made 13 brutal tackles and 62 ridiculously hard-earned metres from 21 carries, but in this pivotal moment the number eight’s offload proved a damaging miscalculation. Sean Maitland’s interception ahead of Robbie Henshaw allowed Laidlaw to calmly find Russell, who shipped matters up to halfway.

Murray kept motoring, producing the slickest delivery for Jackson’s try, but to grasp what really happened the chest-beating Laidlaw proved the scrumhalf to follow.