Patient Wales move through the gears to ease past Italy 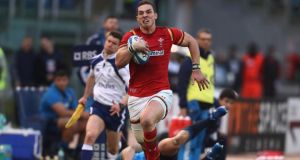 Wales started their Six Nations campaign with victory over Italy after they ground down a resilient Azzurri side with three tries in the final quarter.

Rob Howley’s men had failed to break through the Italian defence in the first hour, but Jonathan Davies and Liam Williams profited from Andrea Lovotti’s yellow card to cross within six minutes of each other. George North completed the scoring late on as Wales won the second half 30-0 but failed to collect what would have been the Six Nations’ first four-try bonus point.

Leigh Halfpenny booted 18 points to give the visitors a winning start to the tournament. And while this ultimately convincing win would have pleased interim head coach Howley, Wales still have work to do before facing England in Cardiff.

Wet weather had been forecast for Rome and driving rain duly arrived just half an hour before kick-off. The slippery conditions did not help the early exchanges to flow, Halfpenny missing with a long-range penalty attempt before Wales lost new captain Alun Wyn Jones to a blood injury.

Jones, who had bloodied his nose, returned to the field, but in his absence Wales had dominated territory and possession.

A potential score for Jonathan Davies was rightly ruled out by the TMO after Lovotti got to the ball and grounded it over the line ahead of the centre.

Keeping Wales out seemed to give the home side a lift and with the first quarter scoreless, Italy then woke up as an attacking force.

A surging run from Edoardo Padovani and a strong carry from Sergio Parisse gave them the field position from which they moved ahead. Edoardo Gori was the scorer, emerging at the bottom of a ruck after another forward drive had taken Italy over the Welsh line.

It was a try the home side deserved, Carlo Canna converting, but Halfpenny’s penalty just before the break ensured Conor O’Shea’s side boasted only a 7-3 half-time lead.

Wales had prioritised a fast start and an improved attacking game for their first game of the tournament. Neither had been evident in the opening 40 minutes, but two quick-fire Halfpenny penalties did give Howley some comfort at the start of the second period.

The full-back’s second kick came following a tip tackle on Ross Moriarty from Italian flanker Abraham Steyn and after such a positive first half, discipline was now the home side’s problem. Another three points from Halfpenny then made it 12-7, with Wales now the dominant force.

Rhys Webb had a try ruled out by the TMO but after Lovotti was yellow carded for not driving straight at a scrum, Wales struck. Fluid hands from Sam Davies, who had replaced the injured Dan Biggar, and Scott Williams, put Jonathan Davies in to score, Halfpenny converting for a 12-point lead.

There was more to come, too.

The men in red were now totally on top, midfielders Scott Williams and Jonathan Davies linking nicely with Liam Williams to send the Saracens-bound winger over in the corner.

Halfpenny nailed the conversion and with the game now won, Wales chased the bonus point. An extra match point for scoring four tries or more has been introduced for this year’s tournament and Wales looked determined to collect it. Sam Davies did brilliantly to put North in the clear, the winger then sprinting clear for his team’s third.

Halfpenny converted, but that proved to be the end of the scoring as Liam Williams’ appeal for a late fourth was ruled out by the TMO.