‘Nobody will be thinking about trophies, but Scotland have momentum - and history’ 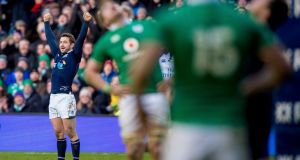 Scotland’s 27-22 opening day Six Nations victory over Ireland was built on past failures according to their national media.

The Scots claimed that the character shown to score two late penalties and win a game in which Ireland had reversed a 13 point deficit to lead by a point on the hour mark, was forged in past defeats. Past defeats from other matches “that should have been won but were lost in the closing minutes.”

As for Ireland, there was a sense that the visitors did not perform to their usual standards rather than them being totally overwhelmed by Scotland.

“Ireland appeared a shadow of the side that toppled back-to-back world champions New Zealand 40-29 in Chicago in November, with Joe Schmidt’s men desperately craving a cutting edge,” summed things up quite accurately in the Scotsman’s match report.

“The visitors battered Scotland at the scrum, only to waste three fine try-scoring platforms from botched penalty lineouts. Scotland were clinical in the extreme in contrast.”

Tom English of BBC Scotland claimed the win was “Scotland’s biggest victory in 18 years, since they were champions in 1999. Nobody will be thinking about trophies, but Scotland have momentum - and history.

“Paris next, with a mighty spring in the step.”

English describes the encounter as “a classic of its kind.

“Scotland’s goose looked cooked, but these players have learned some lessons on the road to this victory, some bitter lessons from matches that should have been won but were lost in the closing minute.”

Similarly Stewart Fisher of the Herald referred to the past in his analysis of a game in which “everything had worked a treat” for Scotland.

“The match was up for grabs as we entered a fraught last ten minutes. In the past, Scotland might have waited for Ireland to take it. But now they have the discipline and know-how to claim it for themselves.

“Win the match and move on. Scotland go to Paris next week with old fashioned opening day Six Nations victory since 2006. That will be bonus enough.”

While the Irish team performance didn’t do much for the Scottish reporters, one Irish player did catch their eye.

Andy Newport of the Scotsman felt the performance of Tadgh Furlong will have done his British and Irish Lions’ ambitions no harm, with an onlooking Warren Gatland in attendance at Murrayfield. He gave the Lions hopeful the highest rating of any of the Irish in his player ratings - a 7.

“Ireland prop Tadgh Furlong also put his hand up (for Lions’ selection ) after dominating Allan Dell at the set-piece.”

In all though there was an appreciation of a highly entertaining match.

“This was an absolute firecracker of a Test match,” wrote English in his BBC Sport match report. “It got off to a thunderous start and rarely let up. The portents for the Scots were not good in the early minutes when their scrum came under heavy attack and started shipping penalties at an alarming rate, but their game-breakers soon came to prominence and set Murrayfield alight.”

1 Gerry Thornley: Ireland don’t want to box themselves into a corner
2 Kevin McStay: Maybe a knockout All-Ireland Championship is the long-term solution?
3 Owen Doyle: Ireland suffered from officiating of the breakdown
4 Sexton and Henshaw to miss Ireland’s clash with Georgia
5 The Offload: Ireland are stuck in no man’s land
Real news has value SUBSCRIBE