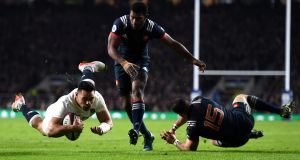 England registered a 15th successive Test victory to set a new national record in a 19-16 triumph over France, but their unbeaten run under Eddie Jones was tested to the limit in a scruffy clash at Twickenham.

Jones was forced to summon the cavalry from the bench to finally break Les Bleus’ resistance with Jack Nowell, James Haskell and former Leinster star Ben Te’o heavily involved in the decisive score that swept the Six Nations champions over the line.

The trio had just arrived on to the pitch but their fresh legs invigorated England with Te’o particularly effective, running hard and straight until picking a strong line to score the decisive try in the 71st minute.

When replacement prop Rabah Slimani crashed over in the 60th minute, France led 16-12 and a first Six Nations win at Twickenham since 2005 looked a distinct possibility until Jones emptied the bench.

It was not the bold and courageous start to England’s Grand Slam defence promised by their Australian head coach, but their success in plotting a route through a stubborn yet dashing France during an enthralling climax is another feather in their cap.

They desperately missed Billy Vunipola’s power at close quarters and the work rate of Chris Robshaw on an afternoon when their backrow was outmuscled in the absence of the injured duo.

Maro Itoje was solid in his first start at blindside flanker, the position vacated by Robshaw, but Nathan Hughes made little impact and Tom Wood repeatedly fell foul of referee Angus Gardner’s whistle.

For France Louis Picamoles was at his rampaging best at number eight, helping them dominate the forward exchanges, while the speed of Scott Spedding’s thrusts from fullback caused havoc among the white shirts throughout.

Spedding sounded an early warning when he launched an early counter-attack with an arching running line after Camille Lopez and Andy Farrell had exchanged penalties in an opening 10 minutes controlled by the visitors.

England were struggling to contain an ambitious start from the visitors and when wing Jonny May was sin-binned for tipping Gael Fickou over the horizontal, they faced an important 10 minutes.

Elliot Daly’s long boot swept them into an promising position, however, and when Wood stole a lineout they attacked for the first time only to be halted by Daly’s chip into touch.

Two further penalties from Lopez propelled France 9-3 ahead and although Farrell replied with three points, the sight of England losing the ball at a line-out ball was alarming.

Once a flurry of penalties against both sides had subsided, a breathless passage of play unfolded with Spedding launching an attack that ended with Noa Nakaitaci bundled into touch before Daly and Ben Youngs staged a scorching counter.

Daly’s monster left boot sent a long-range kick straight between the uprights after Gardner’s whistle had intervened once more to level the score, but the half finished in the same way it had started with France attacking.

And the second half began in the same vein, France escaping danger through quick thinking and the speed of Virimi Vakatawa before Picamoles drove them forwards with two hulking runs.

George Ford and Farrell combined to create a chance for Daly but the Wasps wing just had a foot in touch as he was touching down and the score was correctly ruled out.

The tide was turning as England began knocking on the door as they accelerated on to the ball and raced through holes and when Farrell was on target with his third penalty, they edged ahead for the first time.

But France charge downfield with Picamoles at the forefront of the attack before offloading from Sebastien Vahaamahina and Kevin Gourdon sent Slimani over.

The result hung in the balance but on came England’s bench and France were pounded into submission, Te’o landing the killer blow in the final 10 minutes.