Joe Schmidt: Ireland’s slow start not down to belated arrival 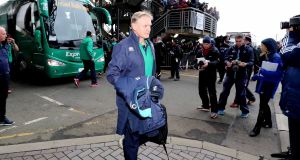 The Ireland team arrived precisely eight minutes late to Murrayfield on Saturday afternoon. Turns out the police escort took an alternative route to what had been mapped in the Joe Schmidt master plan.

Not to be making a mountain out of a traffic jam but when the Irish players and coaches disembarked at the stadium they were further stalled by the kilted pipe band’s march onto the pitch. This meant another four to five minutes passed before our heroes were safely ensconced under the main stand where they could, finally, begin to tog out in peace.

Much ado about nothing perhaps, but Schmidt noted the issue on live television and repeated it to the gathered media before stating it was not a factor in the “sluggish” start that led to Scotland leading 21-8 at half-time.

“We arrived about 15 minutes late to the stadium and we were late for most things all first half,” he said.

Ireland, for the record, stayed at the Balmoral hotel on Princes Street in the middle of this wonderfully intact medieval city. It usually takes 18 minutes to drive the 3.2 kilometres from this luxury five star residence to Murrayfield.

“We certainly were on time leaving the hotel,” Schmidt stated. “It just took a long time. Those things happen, it’s certainly not an excuse for being late to things in the first half but it was probably just a reflection of the way the start of the day went for us.”

Conspiracy theories abound (they don’t really). The Scots outgoing coach Vern Cotter used to be Schmidt’s boss at Bay of Plenty in New Zealand and appreciated the former school teacher’s meticulous nature so much that he enticed him over to ASM Clermont Auvergne.

Nathan Hines is another member of the Scottish back room who acted as a hugely popular Leinster enforcer during Schmidt’s first season in Dublin before joining Cotter in Clermont so the pair of them would know all about his forensic attention to every minute detail.

The 12, or possibly even 13, minute delay did disrupt Paddy Jackson place kicking warm-up with the Ulster man subsequently missing the conversion of Keith Earls’ 26th minute try. Jackson recovered to slot his other three shots at goal.

All the Irish players interviewed post match played down the delay with one senior figure utterly dismissing the mere notion of offering it as an excuse, which begs the question: why bring it up at all?