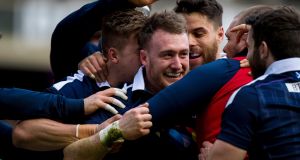 The Grand Slam and the Triple Crown are gone for another year, and even a tilt at a third title in four seasons is seriously imperilled. This was an utter oddity of an Irish performance, strangely lethargic and seemingly ill-prepared for much of a very off-colour first-half performance especially.

Ireland did manage to roll up their sleeves and work (very much the operative word here) their way back from a partially self-inflicted 21-5 deficit to briefly lead before losing their way, and the match, in the endgame

Thus, despite playing poorly in many respects, they will still regard this as one that got away.

Indeed, there were shades of the quarter-final defeat against Argentina as Ireland were made to look comparatively narrow in both attack and especially defence, as the Scots profited from exploring and finding space on the outside edges of the Irish defence as the Pumas had done.

Surprisingly, the Scottish defence looked much better drilled, pushing up hard in a line, with no chinks or doglegs in the line, and as usual the phenomenal Jonny Gray led the way when credited with 28 tackles, while their backrow chipped in with another 46.

Indeed, the Scots made way more tackles (181 to 107) and missed way more (32 to eight) which says much about the way Ireland worked ceaselessly in showing up for carries and clearouts. Ireland recycled the ball at ruck time around 150 times to 100, and one of the abiding memories of the game was the way they went through interminable phases.

While the Irish scrum went well, all in all this was such a far cry from, say, the opening game of the autumn series in Chicago. Almost incomparable, especially with regard to their strangely sluggish start.

The rendition of Flower of Scotland was all the more powerful for the bagpipe band allowing the crowd to close it out unaccompanied. Conditions were not nearly as bad as feared or forecast, with the wind having blown away the morning rain clouds and Scotland kicked off with what amounted to a breeze behind their backs.

But the early wind was taken out of their sails when they lost their first lineout and from a solid scrum, the Irish pack kept with their shove and won a penalty. Ireland went through the phases with one-off runners before Alex Dunbar put pressure on the ball when quick to his feet and then pounced for the turnover. The Scots immediately put more width on the ball, albeit Huw Jones fumbled in the outside centre channel.

Another good scrum and penalty was undone by a Rory Best overthrow and when Finn Russell kicked in behind, Keith Earls gathered but, curiously, declined to pass inside to the left-footed Rob Kearney and compounded this by slicing his touchfinder.

Off the lineout 30 metres out, Scotland went wide for Sean Maitland to make a big carry up the right touchline. After some more hard carrying by Hamish Watson, the Scots had the numbers out wide where Russell skip-passed to Stuart Hogg. As the ball hit the deck, Garry Ringrose was lured out of the line for the attempted intercept – he had no option – but it eluded him and his slip also made it an easy run-in for Hogg. Greig Laidlaw converted.

After a big, inspiring gallop from Seán O’Brien into the heart of the Scottish defence and into their 22, Ireland twice went to the corner. But when Best peeled off the lineout with two forwards in front of him, Romain Poite penalised them for accidental offside, giving Scotland a scrum, and the chance was lost.

Ireland were struggling to establish any rhythm, and Conor Murray was snaffled at the base by Russell to earn the Scots another turnover. But a crooked throw by Fraser Brown gave Ireland an exit.

However, another Irish lineout was lost when Richie Gray got to the Best throw in front of Devin Toner, and by contrast Scotland made better use of an attacking lineout when Richie Gray athletically retrieved Brown’s throw and Laidlaw adroitly collected off the deck. Skip passes by Russell Jones effectively gave Hogg another two-on-one on a soft outside edge, as he dummied Kearney and Earls couldn’t snaffle him from behind, for the fullback to run in his second try. Again Laidlaw converted.

Jackson finally put his imprint on the match and brought Ireland belatedly to life with a sharp feint and go through the initial blue line. Once more, Ireland got their forward carriers, O’Brien, Jamie Heaslip and co, and Robbie Henshaw rumbling through 14 more phases. With a penalty advantage and free play, Simon Zebo came from behind Jackson to take his pass and fling a long right to left pass to Earls, on his opposite wing, and when Tommy Seymour couldn’t complete the intercept, Earls finished smartly.

However, Jackson missed the touchline conversion – his first missed kick at test level in 16 attempts dating back to the third Test in South Africa – and worse, Ireland coughed up an utter own goal of a try.

Murray, not being protected from the restart, shaped to box kick but then changed his mind and passed to the blindside, where he had numbers. But Kearney had begun his chase and ran into the ball, to give Scotland soft possession. Russell’s deft grubber forced Zebo to concede an attacking throw, from which Brown threw low to centre Dunbar, standing at two near the front of the line, and with Tadhg Furlong already having turned his back to lift Toner, Dunbar sauntered through the huge gap between Best and Furlong to score untouched. Laidlaw converted for a 21-5 lead.

An old school try, in some respects, and a shocking try to concede on so many levels.

Small compensation came by way of a Jackson penalty, but their attack again lost its shape for Ringrose to be penalised for a side entry, and Ireland were indebted to an intercept by Zebo as Scotland pushed for the tournament’s first ever bonus point by half-time.

Even so, Maitland won the race to Zebo’s kick upfield, and Schmidt and the Irish coaching staff and leaders had near on 15 minutes to rectify plenty and overturn a 21-8 interval deficit.

After a third lost lineout, Ireland were put on the front foot when O’Brien’s strength over the ball earned a penalty and another lineout. Another multiple phase attack culminated in yet another penalty against the Scots for going off their feet at a ruck inside their 22. The penalty count was now 9-2, yet Poite had so much as issued a warning save for scrum time, much less brandish a yellow card.

Ireland opted for a scrum, Henshaw trucking it up strong a couple of times, and O’Brien’s offload to Murray enabled CJ Stander to make a good carry. After Murray himself dived for the line, with yet another penalty advantage, eventually Iain Henderson plunged over. Jackson converted.

A Scottish attack was lifted when Stander pounced on a fumble by Laidlaw, and Ringrose worked a switch with Earls. O’Brien made another big line break that he seemed to have no right to make after pumping his legs in the tackle, but Ireland were done for holding on.

When Murray blocked a grubber by Russell and gathered, he then made ground before picking out Heaslip with a fine pass infield. Heaslip galloped toward the line but when hauled down went for an offload which Maitland picked off.

Scotland were soon indebted to Maitland again, after a brilliant carry by Kearney as he pumped his legs and used his strength to beat two tackles, but Maitland just did enough to drag Kearney’s foot over the touchline before offloading inside to Earls.

But Ireland wouldn’t go away. Their desire, and work-rate, to show up for the ball and continually make effective clearouts, was immense. It had to be. Furlong and Heaslip typified this through 14 phases with big rumbles, before eventually Jackson picked a superb inside shoulder line, more like an inside centre than an outhalf, to break Dunbar’s tackle and take one by Josh Strauss to reach out for the line. His conversion pushed Ireland in front.

However, Ireland ran out of numbers at one breakdown too many, affording Scotland a relieving penalty. After their turn to go through the phases, Heaslip was penalised for not rolling away and Laidlaw kicked Scotland back in front.

Ireland’s last chance effectively went with an over-cooked box kick by Murray to Hogg. Scotland saw out the match in the Irish 22, first pushing a penalty into the corner to look for a fourth try, but primarily to run down the clock, before Laidlaw then elected to seal the deal with a three-pointer as the 80 minute mark pass.

As the Scottish team ran en bloc to Laidlaw, the Irish players traipsed toward the half-way line. This one will hurt, and will be felt for the rest of the championship.