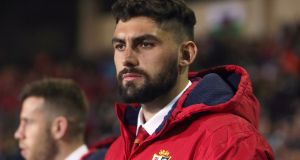 Cory Hill: “It’s a case of one last effort and I’m sure the boys will put the hard yards in. A first series win here since 1999 is all the motivation we need.” Photograph: David Davies/PA

Wales captain Cory Hill hopes he can be the man to lead his country to a first series win in Argentina since 1999 when the two sides meet in Saturday night’s second Test in Santa Fe.

Warren Gatland’s side are 1-0 up in the two-match series and know victory at the Estadio Brigadier Lopez would complete an unbeaten summer tour.

After edging out South Africa 22-20 in Washington, Wales’ young players have impressed in the land of the Pumas and are now only 80 minutes away from a clean sweep.

Hill skippers Wales for the second successive game and said: “We have had another very good training week in Buenos Aires and we are ready to go for this game. Argentina are going to be coming for us, but we are ready for that challenge and it’s the last game of the season for us so the boys are buzzing to get out there.

“We know we have six to eight weeks off after this so it’s a case of one last effort and I’m sure the boys will put the hard yards in. A first series win here since 1999 is all the motivation we need.”

Wales have made five changes to their team, with Gatland opting for dual openside flankers in James Davies – man of the match in the first Test – and Ellis Jenkins.

Owen Watkin replaces the injured Hadleigh Parkes at centre, while there are also first starts of the tour for scrumhalf Aled Davies and tighthead prop Tomas Francis.

Rhys Patchell has edged out Gareth Anscombe for the fly-half jersey with Hill alongside the promising young Adam Beard at lock.

“It’s an old school football stadium and it’s going to be nice and hostile,” Hill added of the Estadio Brigadier Lopez, which is surrounded by a moat and barbed wire.

“It’s a great venue for us to play in. Three wins from three would turn this from a good tour into a great tour, but having a moat around the pitch is new to all of us!

“The boys are still loving the experience of playing in Argentina. The last time we won here Rob Howley and Neil Jenkins were the stars. They’re our coaches now, so it was a long time ago! I’m sure they’ll give me stick for saying that, but as a team I think we’ve got another five or 10 per cent to give which is hugely exciting.”

Gatland has stoked the fire ahead of the second Test by claiming Argentina’s players should be “embarrassed” by their performance in the first match of the two-game series.

Pumas head coach Daniel Hourcade has responded to the 23-10 defeat in San Juan by making just the one change, Martin Landajo replacing Gonzalo Bertranou at scrumhalf.

“We decided to select Martin and give the same team the chance again because none of them was happy with what happened last Saturday. We want a rematch,” Hourcade said.

“We had a very bad game last week and we really want to reverse it. We’re going to see a team with a lot of attitude and a lot of fire with desire to change the image we left in San Juan.

“The key is to change our attitude. We have to win the point of contact and put into operation the game plan we did not manage to do last week.”

1 World Rugby study advises removal of reset scrums to reduce Covid-19 risk
2 From TB to polio: GAA is no stranger to disease disruptions
3 Coming fourth in the Olympics didn’t change this fearless quartet, time did
4 Rory McIlroy now realising the power his words carry as world’s number one
5 Sideline Cut: Vignette shows why Bird is the true shark in The Last Dance
Real news has value SUBSCRIBE