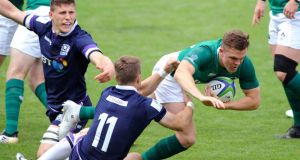 The imprecision and morass of errors that pockmarked previous defeats in the tournament resurfaced again as Ireland crashed to a fourth straight defeat in the Under-20 World Championship at the Stade Aime-Giral, and as a result must play Japan in the relegation match next Sunday in Beziers.

Handling, discipline and turnovers once again undermined the Irish patterns and no amount of courage, epitomised by the efforts of Matthew Agnew, Jack Dunne, Joe Dunleavy and Tommy O’Brien in particular, or sporadic individual brilliance - conspicuously in the case of fullback Michael Silvester - could rescue another acutely disappointing afternoon.

Ireland started the match reasonably positively despite conceding an early penalty which Scotland scrumhalf Charlie Chapman landed, but the origins of that score summed up the frailties within the performance - an overthrown Irish lineout in the Scottish 22, the ball hoofed downfield for a loss of 70-metres and then the concession of a penalty for a high tackle.

Noel McNamara’s side responded with their best passage of rugby , Harry Byrne scoring the first try and then creating the second with a delightful grubber kick, which Peter Sylvester dotted down under the posts.

The Irish outhalf converted both tries and at 14-3 Ireland were set fair, especially when considering that they should have crossed for another in between the two tries, but industrious secondrow Dunne could not hold onto the pass with the line beckoning.

Scotland were invited back into the game from the kick-off, a fumble and a penalty giving them a lineout from which prop Finlay Richardson drove over as he would do again eight minutes later, Chapman converting both tries. Ireland’s handling, discipline and a misfiring lineout saw them concede a try to wing Logan Trotter while a man down, Hugh O’Sullivan receiving a yellow card for a no-arms tackle.

Trailing 24-17 at the interval Ireland desperately needed a good start to the second half but instead conceded three tries in the third quarter of the match as a misfiring lineout and a wayward kicking game cost them dearly, while tired minds and limbs in defence allowed the Scots to pour through at times.

No one disputes the character in the group and despite losing captain Caelan Doris to a yellow card they scored two of the game’s final three tries, through Tommy O’Brien and replacement prop Bryan O’Connor; but it amounted to no more than window dressing on the scoreboard.

Ireland’s seventh defeat in nine matches this season between the Six Nations and World Championship leaves them with one final opportunity to avoid the nightmare of relegation.