Ireland only scored three points in the second half against Georgia in a performance that head coach Andy Farrell said "just wasn't good enough". Video: VOTN 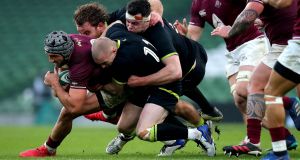 “We lost a lot of our scoring opportunities because we lost six lineouts,” said Maisashvili.

The easiest approach to an Irish performance devoid of any traits usually associated with a Farrell coached side is to identify the root causes.

A rookie captain in James Ryan and rookie head coach have failed to strike the motivational balance required for Test match rugby. Worst of all, these players lack the precious ability to think on their feet. This ensured a lack of attacking verve or obvious strategy despite the recruitment of Mike Catt, who previously ran out of road in the England and Italy backrooms.

And there is the old excuse – an ever increasing injury list despite other countries figuring ways of managing players despite equally heavy workloads.

The decision to start Finlay Bealham at loosehead, where the Georgians gave him a memory to sit beside the humiliation of Tom Court by Alex Corbisiero at Twickenham in 2012, says more about the coaches than it does about the Connacht prop.

Moving the mighty Andrew Porter out of tighthead – the 24-year-old rose through the ranks at loosehead – retains a solid drum beat.

“Wherever I am getting more minutes on the pitch that is where I want to be,” said Porter, understandably. “At the moment it is at tighthead, so until further notice I am staying put.”

But, Andrew, would you not be a better loosehead? “I don’t even know, it is hard to tell but, sure, look, it is like riding a bike I’d say.”

Now is a perfect moment for Johnny Sexton to renegotiate his contract. Ireland play like a bull on ketamine without the controlling influence of their great yet ageing No 10. Sexton may lack the patience of Diego Maradona when lesser players make a mistake but he infuses the team with a similar belief that anything is possible when he’s calling the plays.

The hamstrung general craves pressure while Shane Horgan suggested last week that Ross Byrne is “no threat whatsoever” and could be “afraid” to engage the line.

“Look, I have no doubt we are going in the right direction,” said James Ryan, despite the weight of captaincy appearing to impact on his own performance (or he is injured). “Even the games we have lost recently I have said the same. Today was just disappointing. Sometimes you have those days.

“But it is not like we don’t know what to fix. They are all very fixable issues. Today it was the ruck – a massive part of our game that we can get right.

“Being more efficient in that middle third of the pitch, having a bit of variety, putting the ball in behind them and knowing when to play,” Ryan continued, reaching out for positives in an ocean of negativity. “We know ourselves what is going wrong. That is great for us, there is so much to work on and this week is a great opportunity to finish the year on a high with Scotland coming to the Aviva.

“We want to produce a performance the country can be proud of.”

The 2020 autumn campaign can go one of two ways now. It will signal the beginning of the end for the current coaching team under Farrell or something will click against Scotland at the Aviva stadium.

Another escape hatch is to embrace mediocrity by accepting the good times are behind Ireland. That assuages the pain of this abysmal two try victory over a Georgia side with next to no time together since the last World Cup.

The sight of Ireland kicking the points instead of chasing tries, as Ryan did the opposite of what many felt should have been done before losing in Paris and Twickenham, felt awfully like a team that does not know who they are.

“The thinking was it is a proper Test match,” Ryan responded. “We were 10 points up at the time and they had that bit of belief in the game at that stage. Going 13 points ahead gives us a bit of a gap there and a bit of comfort to start playing more.

“That’s my take on it. They fronted up massively in that second-half so when the points were on offer like that, for me, we are going to take them.”

The alternative argument is Georgia fronted up so massively because Ireland showed them too much respect. Half their team are amateurs, the other half struggle for game time on the French club scene. This feeds into a growing opinion that results will get worse before they get better.

Scotland, like everyone else watching Farrell’s men struggle to deliver a coherent style, will come to Dublin seeking to push past Ireland in the global pecking order.

“I don’t think we are too worried about status,” said Ryan. “We are just worried about winning at home. We don’t like losing at the Aviva.”