The Offload: Shane Horgan pulls no punches as the podcast wars rage on 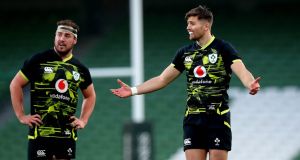 Rugby podcasts are 10 a penny these days. Most of them are blokes lathering themselves in banter so any sort of decent analysis is swallowed whole by a listening public that has been living off scraps for a very long time.

The 42’s Rugby Weekly never fails to educate - mainly via Bernard Jackman’s coaching nous - but Brian O’Driscoll on Off The Ball appeared to have won segment of the year when going straight at Johnny Sexton’s behaviour in Paris.

Shane Horgan accepted these new standards of commentary, and went one better when predicting a period of “mediocrity” under Andy Farrell without “a philosophy that will elevate us to the top table.”

It helps that these men are talking about players they played against rather than coaches that coached them, but Horgan on Second Captains cut through a lot of media pandering when noting the current course of Farrell’s Ireland team “is going to be really destructive.”

On the Englishman’s first year as Ireland head coach, Horgan said: “We are left with somebody who is not an innovative thinker who is implementing a game plan that is out of date...Modern rugby players want detail and a game plan that they can see working...Motivation and aggression by itself is nowhere near good enough.”

On Ireland’s new attack coach, Horgan pivoted into a laceration of the Ireland outhalf at Twickenham: “Worryingly, and I don’t know if this is Mike Catt’s coaching or not, but Ross Byrne’s positioning from every single phrase was appalling. He is standing deep and not moving one inch forward, just shovelling it on. He left his centres in a really tricky position. He is no threat whatsoever. It was almost as if he was afraid to engage the line.”

There was zero evidence against Georgia that Horgan was being unfair.

16 - months since Springbok winger Aphiwe Dyantyi tested positive for metandienone, methyltestosterone and LGD-4033 yet there is still no judgement from the South Africa Institute for Drug Free Sport.

“The obvious lesson is the physical up front nous that we need to play with for the full 80 minutes.” Andy Farrell

“Where was James Lowe? He’s dragging a dresser back there. He’s too big. He’s dragging a tractor, mate, turning. I watched him during the game. He is too big, too heavy, too slow.” Chris Ashton on the BBC rugby podcast.

“I felt the need to clear up the confusion. My comment was to do with Jonny May’s try ONLY and not James Lowe as a rugby player. He is an outstanding player and will play for Ireland for many years to come.” Ashton climb down on Twitter does not add up with his actual words.

“James, if we have a break on the openside and you do not get back as fast as you can to cover it, and you are beaten by Peter O’Mahony, who was being lifted in the lineout, then we got a problem.” Shane Horgan on Lowe’s tardiness.

“It has been a very long journey but finally made it, thank you to everyone who helped me along the way.” Ireland prop Linda Djougang qualifies as an emergency medicine nurse having spent the pandemic working in the Covid zone at Tallaght Hospital.

With 2020 almost in the can, the wonder is how Bill Beaumont views the start of his second term as World Rugby chairman.

Does Sir Bill - a likeable character ever since The Question Of Sport days - perhaps see any issue with his vice chairman Bernard Laporte being questioned by the French financial police?

How about the Fiji debacle that had a convicted murderer supporting both Beaumont and Laporte’s re-election and for that same person to only be nudged off the World Rugby Executive Council after accusations of homophobia? All this only came to light via media reportage (the investigation is ongoing, right?). How about the shooting outside the Georgia rugby union offices? Or the doping case of Aphiwe Dyantyi, the 2018 world breakthrough player of the year, that has dragged on since July 2019?

The reputation of professional rugby is in tatters to anyone who cares about the sport.

“I have strived to implement key governance enhancements that inject further transparency, clarity and consistency into our decision-making processes,” Beaumont said recently of plans to ensure voting for future World Cup hosts would be done electronically and the results published.

We await this revolutionary transformation with bated breath.

State of the Nation

David Nucifora - the IRFU boss of bosses - is doing his annual media sitting at lunch time on Monday.

Six years into the job of High Performance Director, a position created for the Australia, is a good time to ask some hard questions about what he has achieved since bringing Johnny Sexton home from Paris.

The contract negotiations have certainly been streamlined and done earlier with Simon Zebo and Donnacha Ryan - major losses to the “small player pool” Andy Farrell has begun to mention - wanting to leave Munster. Every other player that wants to stay has been looked after financially with a few 30-somethings who expected one last contract out of loyalty were ruthlessly cut loose.

But is Nucifora doing a good enough job? Has the reliance on decent, honest players from New Zealand and South Africa been sufficiently balanced with the six year plan to “fast track” Irish born talent?

Looking at results this season - particularly Sunday’s shambolic display against Georgia and defeats to France and England - the answer would have to be no, the job has fallen short of expectations since 2018.

If you hear Nucifora leaning on the excuses we are hearing from Farrell about this being a long term journey then Irish rugby is in deep trouble. We did not know that a lull season was ever part of the High Performance plan never mind two years. And what about the World Cup semi-final goal after two attempts?

Joe Schmidt and Enda McNulty cannot be blamed for the drop in standards in 2020. Nucifora is an impressive character but his reign, especially player and coaching recruitment, must now come under a stern review.