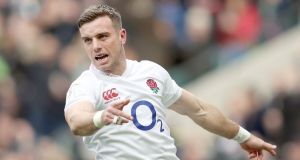 George Ford: “Something we need to be aware of 100 per cent is that we’re going to come up against a team that will do anything to win this game,” he said. Photograph: David Davies/PA

England are braced for a Wales backlash as they hunt a place in the Autumn Nations Cup final, with outhalf George Ford warning their opponents will be a “different beast” because of the rivalry between the two nations.

Ford and co need only a bonus point in Llanelli to book their place in next Sunday’s final at Twickenham and are favourites for victory given the two sides’ contrasting form. England were dominant against Ireland last week, racking up a sixth consecutive victory, whereas Wales’ win over Georgia ended a run of six defeats.

Furthermore, with Ford returning to Eddie Jones’s side, England boast 807 caps whereas Wayne Pivac is sticking by his decision to build towards the 2023 World Cup despite Wales’ patchy form.

England did lose their last competitive fixture away to Wales but edged to victory in March at Twickenham and will not be confronted by the wall of noise that so often gives their opponents a lift in this fixture.

Recalling England’s losing run of six matches in 2018, however, Ford is wary of facing a wounded animal. ““And that makes Wales a different beast. It shows what we need to be like. It shows that what we’ve done up to this point is not going to be good enough. That we need to raise our performance levels again.

“Any guy playing in the red shirt against England is going to do everything they can to win that game. Sometimes that [being written off] can galvanise a team. That’s why we’re preparing for the best possible Wales performance.”

While England have been destructive in defence so far, their attacking threat has been limited with Jones on Thursday claiming it will be kept under wraps until the year before the next World Cup.

Ford was similarly circumspect as to whether England – who also line up with playmakers Owen Farrell and Henry Slade in their midfield – would be more expansive against Wales.

Ben Youngs, however, believes the return of his Leicester team-mate will make a difference.

“George gives us that extra bit of width in attack, being able to shift the ball, almost playing two-sided attack with him and Owen splitting,” said Youngs

Should England reach Sunday’s final they will face either France or Scotland in front of 2,000 supporters at Twickenham.

Lifting the trophy would cap a fine year for England, who began it with a lacklustre defeat by France – their first match since losing the World Cup final to South Africa.

Ford added: “We have spoken as a group of players of what it will look like for us if we go down there and get a positive result and of making sure we’ve got our mindset right.” – Guardian