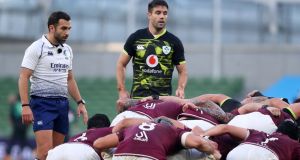 Ireland’s scrumhalf Conor Murray waits to put the ball into a scrum during the Autumn Nations Cup match against Georgia at the Aviva stadium. Photograph: Niall Carson/AFP via Getty Images

Poor decision under pressure to trust that Burns could tackle Giorgi Kveseladze. The fullback makes the hit. Has the skills, the pace and a booming left boot to become a world-class operator at 15 but the wait continues. Rating: 4

One of the bright sparks of 2020, looking every inch an international calibre wing or fullback, particularly in the air or finishing off attacks. Rating: 5

Lovely flick to create the Burns try, after convincing the defenders he was going to charge into contact. Attempted to bring some variety to his game but swallowed up by Jalagonia to gift Georgia three points. Rating: 4

The Ulster centre, who never gets a prolonged run in the team, was unable to drag Ireland from their second-half gloom. Henshaw or Aki would have done more. Rating: 4

May as well pick a tractor. The obvious criticism of Mike Catt’s attack strategy was the lack of times the playmakers managed to put Earls into space. Why bother having a wing of this calibre on the field? Rating: 4

Kicked his points before the injury. Missed tackle on Kveseladze should not take away from the centre’s magic try but the Scots will be licking their lips to expose this club standard outhalf, much like Ross Byrne was shown up at Twickenham. Rating: 4

Felt like another needless selection pre-match but Ireland needed him. The path to becoming the starting Lions scrumhalf in South Africa next summer should open up now. Rating: 5

Pancaked on the grass at enough scrums to bring into question the coach’s decision to move the Australian from tighthead to loosehead when there is already a loosehead playing tighthead. Out of his depth, he drowned. Rating: 2

Fixed the lineout and piloted an outdated maul towards the Georgia try line (where he came up short). Ronán Kelleher needs all the exposure and live tutorials that are going, starting with Scotland next week. Rating: 4

Muscled some scrum dominance back Ireland’s way with another impressive display against an opponent not named Mako Vunipola. Sat down at half-time before he blew a gasket. Rating: 5

This World Cup cycle will be the years that define Henderson’s injury-prone career. There’s a raw strength in his bones that makes him essential to the cause but he failed to inspire a respectable result here. Rating: 4

The young captain looks jaded. The dominance we have grown to expect from him in the loose exchanges has fallen off in November. Perhaps he was spooked by Maro Itoje. More likely, he is carrying an injury. Rating: 4

Blindside has always looked like his best position, simply because it offers more opportunities to steal the ball, but he lacks the power to become Ireland’s resident number six. Rating: 4

For all the talk of deep stocks at backrow and Connors’s excellent tackling technique – which should be a given – this team badly needs an athletic flanker that does damage top of the ground. Rating: 4

Charged around like a 10-year-old playing against under-8s which required plenty of bodies to haul him down but showed nothing that we did not already know. The under-8s had him well sussed. Rating: 4

Ross Byrne kicked his points, whoop-de-doo. Cian Healy shored up an embarrassing scrum. No true impact from a bench clearly operating on a low ebb. Rating: 3

If the rookie head coach presumed 2020 would provide scope to rebuild and remove the “detail” that fatigued players under Joe Schmidt, Andy Farrell now realises the standard of coaching that is required to succeed at this level. Enough excuses about the player pool numbers and being on a new journey. He needs help. Rating: 3