Ireland miss the Grand Slam bus with a sluggish start

Blame their tardy arrival at, but Ireland never found that extra gear to beat Scotland 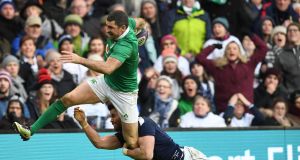 A tardy arrival by bus can hardly explain such an emotionally sluggish entry into to a Six Nations opener, the consequences of which has already scuppered any chance of a Grand Slam or Triple Crown, and seriously imperilled a shot at a third title in four seasons.

Regrets, Ireland will have a few, not least falling 21-5 behind by the half-hour mark. But even then, 17 unanswered points saw Ireland briefly lead, but they were unable to close out the deal. At times, most notably in that opening half-hour, it was hard to reconcile this Irish performance with those, say, against South Africa, New Zealand and Australia.

It’s hard to believe that Ireland were either so discommoded by their late arrival at the ground or, more to the point, were in some way complacent. But maybe, just maybe, Ireland actually didn’t have that element of fear that they took into battles against the Springboks, All Blacks and Wallabies.

How else to explain why Scotland brought more emotion, physical intensity and clarity to their game than Ireland did?

How else to explain how Ireland looked narrower in both defence and attack, Scotland thus exploiting soft outside edges – as Argentina did in the World Cup quarter-final – for both of Stuart Hogg’s tries?

This was especially so of his second, as Josh Strauss’s carry up the middle off the top line-out ball drew in the entire 10-12-13 axis, whereupon skip passes by Finn Russell and Huw Jones effectively afforded Hogg a two-on-one against Rob Kearney before dummying to go through and score.

The narrowness of the Irish defence was rectified for the second half (indeed some better line speed out wide had forced a turnover through Simon Zebo’s intercept) as Vern Cotter accepted afterwards. “In the second half they changed their defence, came up a bit harder and cut off our outsides.”

Garry Ringrose and the wingers came up harder and made some good reads, as the absent Andrew Trimble generally does, and Scotland never looked like scoring a try after half-time. But by then they had added a third after Conor Murray and Rob Kearney messed up an exit before Scottish centre Alex Dunbar scored untouched from Ross Ford’s throw, sauntering through a gap between the unsuspecting Rory Best and Tadhg Furlong.

This was thus the fourth game running in which Ireland had conceded three tries, and brings to 23 the number conceded in the eight games since Andy Farrell came on board.

“You never want to concede any tries,” said Schmidt. “The tries we conceded today were particularly frustrating. The line-out one, the two down the left hand side that Stuart Hogg scored were frustrating, especially as we know the danger he represents. I think if you look at the second half, the defence was pretty sound and I would hope that is something we can build on.”

Different defensive coaches, and different personnel, but whether coincidence or not, a common ingredient with that quarter-final and this defeat was the absence of Johnny Sexton and the often-unheralded linchpin of the Irish defence, Jared Payne.

Interestingly, just for the record, Scotland’s win was in part attributable to Greig Laidlaw’s goal-kicking (he landed five from five), two try-saving interventions by Sean Maitland, Huw Jones’s try-scoring pass to Stuart Hogg for the Scots’ second try and the aerial skills of Richie Gray (amongst other things). All four are foreign-based, and the Scots are not so proud that they won’t pick them.

Not that, say, Ian Madigan would necessarily have won the match for Ireland had he been picked and then plucked from the bench. Furthermore, the IRFU’s husbandry and policy regarding selection principles for the national team have ensured that the four Irish provinces have remained infinitely more competitive than their Scottish counterparts, which now number two: Edinburgh and Glasgow.

But, in the heel of the hunt, for all Ireland’s deepening squad strength, the ripple effects of missing Trimble, Payne, Sexton, Sean Cronin, Donnacha Ryan and Peter O’Mahony reduced Ireland’s options. Hence, the impact of the bench was relatively negligible, not least as three remained unused.

Ireland also attacked as if the forecast heavy rain and wind had materialised, and the abiding memory of the game was Ireland going through multiple phases through their array of ball carriers, CJ Stander (24 carries for 49 metres), Jamie Heaslip (21 carries for 62 metres) and Robbie Henshaw (19 carries for 22 metres).

All that said and done, Ireland made a dozen line breaks to six, as well as making more carries and more metres. Their dominance from half-time to beyond the three-quarter mark was pronounced. Rob Kearney, Paddy Jackson and Seán O’Brien made eight of those line breaks. Rory Best, Jamie Heaslip, CJ Stander, Devin Toner, Tadhg Furlong and Robbie Henshaw put in enormous shifts, and weren’t alone.

From 22-21 ahead, had Ireland closed it out, we’d have hailed an initially flawed but memorable comeback, and they were a little unlucky that decisions went against them, eg Mark Bennett’s deliberate knock-on not being pinged.

But they were also inaccurate: a third attacking line-out was turned over, Kearney missed Zebo with a right-to-left pass out wide, Murray overcooked a box kick – and then fell on the wrong side of Romain Poite. And so Laidlaw kicked Glasgow home.

This one will hurt for some time.