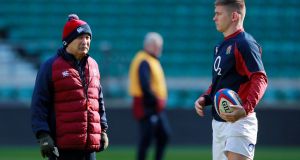 Eddie Jones and Owen Farrell ahead of England’s clash with Wales at Twickenham on Saturday. Photograph: Andrew Couldridge/Reuters

Despite the uncertainty surrounding the spread of coronavirus across Europe, it appears Ireland’s Six Nations game against France will go ahead as scheduled next weekend with the French Rugby Federation (FFR) insisting the match will not be “cancelled, postponed nor advised to take place behind closed doors”.

As things stand, with today’s match against Italy postponed indefinitely, Ireland might have to wait until the autumn to complete their Six Nations campaign - but they may still have the chance to stop a French Grand Slam in Paris next Saturday.

Having consulted with the French government, the FFR last night confirmed the meeting between Andy Farrell’s side and Les Bleus at the Stade de France will definitely go ahead.

A statement said that, “public outdoor gatherings, such as sports meetings in large stadiums like the France-Ireland matches of March 13th, 14th and 15th, will proceed as long as they do not lead to interactions with people from areas heavily affected by the virus.”

The clash between the Irish Women’s and Under-20s teams have also been given the green light, and the three matches “have not been cancelled, postponed nor advised to take place behind closed doors”.

All matches being played in large stadiums in France are being allowed to continue, with supporters attending the Stade de France being asked to take precautions as recommended by health authorities. Those who live in cluster areas affected by coronavirus have been urged not to attend, and been have offered a ticket refund.

Les Bleus could be able to secure a first title and Grand Slam since 2010 when Andy Farrell’s side come to town. However, before attentions turn to a Saturday night in Paris, Fabien Galthié’s Les Bleus have to negotiate Sunday’s trip to face Scotland in Edinburgh, as the Championship continues full steam ahead this weekend.

In the current climate, as the coronavirus continues to spread across Europe and globally, it seems almost surreal that England will be hosting Wales in front of a near 82,000 capacity at Twickenham on Saturday before the Scots entertain France at a 67,000 sold-out Murrayfield.

Both grounds will be awash with hand sanitisers and other precautionary measures, but it seems at odds with the prevailing health and governmental decrees regarding large gatherings at sports and other public events.

In any event, the recommendation by the Irish Government that the Ireland-Italy games at men’s, women’s and Under-20s levels scheduled for this weekend should be postponed, which the IRFU acceded to, now seems prescient.

Whatever happens this weekend and next, the final pecking order and outcome of this year’s tournament is likely to carry over into October, when it will either be completed or not at all.

Either way, Italy’s tournament is already over for the time being at least, while England’s will end after Saturday’s game when victory would at least ensure them of a first Triple Crown in four years.

Having recovered from their opening day defeat in Paris, England go into today’s game buoyed by their sleeves-rolled-up win over Scotland at a storm-afflicted, feisty Murrayfield and their handsome 24-12 win over Ireland at home last time out.

Wales meanwhile have been undergoing something of a transition under Wayne Pivac, who has gambled on the fitness of the gifted Liam Williams in his first game since the World Cup quarter-finals in place of an injured Josh Adams. Scrumhalf Tomos Williams, prop Rob Evans and backrow forward Josh Navidi also start in replacing Gareth Davies, Wyn Jones and Taulupe Faletau.

England are thus not only playing at home with vengeance in their nostrils, but have momentum, are more settled and have the bigger prize at stake.

That said, no fixture quite stirs the Welsh souls more than a meeting with the Red Rose, and they’ll also be hurting from the defeats by Ireland and France.

However away wins are hard to come by in the Six Nations, and although France achieved the feat with that thrilling 27-23 win over Wales in Cardiff a fortnight ago in the game of the tournament under the Principality Stadium’s closed roof, the same applies when Les Bleus will be exposed to the elements in Murrayfield on Sunday.

Heretofore, the breaks have not gone Scotland’s way, for they have been given relatively little credit for the manner they showed up in the bonus point defeats by Ireland and England.

Furthermore, they will have had plenty of video information regarding France’s new Shaun Edwards’ inspired rush defence to study.

“This week we face a France team that looks galvanised since the World Cup, with a potential Grand Slam in their sights following impressive wins over England, Italy and Wales,” Townsend said.

“France’s victories have been built on an aggressive and well-organised defence, so the precision, decision-making and effort in our attacking game will have to be very good in order to get in behind them this weekend.”

One would feel more confident for Scotland’s chances were the Racing 92-based Finn Russell orchestrating their attack in his own inimitable way, but this game does have the potential to derail France’s Grand Chelem ambitions when they host Ireland next week.

1 Ireland 23 Georgia 10: How the Irish players rated
2 Sordid murder of hurling brothers still resonates in south Galway
3 Ireland’s autumn of discontent continues with abysmal Georgia showing
4 Ireland grind their way to grisly win over Georgia
5 No fireworks but Limerick get the job done against Galway
Real news has value SUBSCRIBE