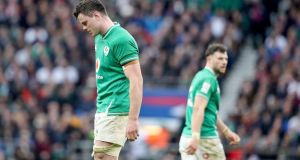 James Ryan cuts a dejected figure after the defeat to England at Twickenham. Photograph: Dan Sheridan/Inpho

Twickenham can be daunting.

And, when you’re on the receiving end of a comprehensive drubbing, it’s a very difficult place to be. We were assured that preparations were very good. But Ireland played badly, and to sink so far below performance par in key positions must do more than ring alarm bells.

It’s past time to rebuild, and the compelling case for Cooney cannot surely be further ignored. He brings an incisiveness and variety to the No 9 position that we badly need.

Before the match the main concern was around referee Jaco Peyper, but he had no influence whatsoever on the result.

The scrums, though, were a huge issue, and he’s not alone in finding these more than tricky. He would have been better advised to take more positive action rather than constant resetting. Looking for stability towards the end of the match was, I hope, as frustrating for him as it was for us.

Ireland were in fact pretty fortunate to always keep a full complement on the pitch. Dangerous ruck entries by both Devin Toner and James Ryan were not picked up or reviewed by the officials.

They were lucky (if that’s the word), because a card was on the way – the decision would only have been which colour. Roll on the World Rugby meeting in March, it all needs sorting.

Not reviewed either was Rob Henshaw’s late ‘no arms’ tackle on Jonny May as he kicked through to chase – it was at least a penalty, and maybe a card. While the kick through was some distance out who would have bet against May winning the race to touch down? Not me for a start.

France’s win over Wales was a terrific match.

When Cardiff is in this mood it’s a cauldron of intense emotion off the pitch, and intense physicality on it. What a sheer delight to see France making such a stirring comeback to being a true force, they are needed.

Nothing can fully prepare a referee for his first match in this atmosphere, and I speak here from personal experience. Matt Carley will have learnt a hell of a lot, and that’s not a clever way of saying he did badly. But the speed of events, and the ever-rising physicality, was a huge challenge.

We saw clear evidence of the far too common and growing trend of players protesting and appealing to referees. Captains also seem to think they can open a prolonged debate at any time.

Dan Biggar (not the captain) tried to change a free-kick into a full penalty – the referee was correctly not interested. But Biggar’s wide-eyed protests needed to be very firmly addressed.

It will only get much worse if the referees don’t put a hard full-stop to it now; they have all the tools to do so, and must use them. Stop it here, and it won’t be replicated at amateur and schools levels. Don’t, and it will be.

The match officials were faced with several key decisions and Welsh coach, Wayne Pivac, has expressed his disagreement with two.

There was a scrum penalty to France in a defensive position which might have gone the other way, but there are also arguments which support the referee’s call.

A key moment was a knock-on in the tackle by France’s Paul Willemse, as Wales moved wide with a clear overlap, try line in sight. The question was simple. The answer was not.

Was it deliberate, or was it not? If the former it was cleverly engineered, and the officials hoodwinked. I believe deliberate – penalty try and yellow card. The officials reviewed and consulted, their conclusion being that it wasn’t, and went with just a knock-on. Their call, difficult call.

Who said it was all easy?

The number of repeated infringements by France meant that they played a quarter of the match with 14 players; and Wales should have made more of their numerical superiority.

While the yellow card to No.8 Gregory Alldritt actually appeared incorrect, France could well have had more, as they continued to infringe during advantage plays. The penalty count was 6 by Wales, 14 by France.

That count brings us neatly to a current Laws trial in the Southern Hemisphere. Teams will have a maximum number of penalties which they can concede, and then the next one will be accompanied by an automatic yellow card. That’s interesting.

It has the potential to result, at crucial moments, in teams being reduced to 13 when the automatic card precedes, or follows, a normal card for foul play or – to keep it topical – a deliberate knock-on.

Had it been in operation last Saturday we would probably have had the preposterous situation of Matt Carley advising the French captain, with, say, 10 minutes to go – “you’re on your last penalty, next one is a yellow card”.

Correct me if I’m wrong, but that would surely put the frighteners on any team, given the wide variety of potential offences both when attacking and defending.

It would also compound referee error, as somewhere in the penalty quota there’s bound to be at least one mistake.

Over to Scotland’s win in Italy, a match of little intensity which a poor Scotland team won easily.

Both these teams need to look closely in the mirror to see what they must do to become regularly competitive. Their performances underline that this is a two-speed Six Nations.

And that’s a great shame.

Envoi Allen continues relentless march at Punchestown 13:30
England need 36 to win as bad light halts play in Sri Lanka 13:04
Bríd Stack hospitalised after injury in AFLW pre-season friendly 11:28
India rearguard frustrates Australia and leaves series in the balance 11:19
Brendan Steele takes the lead at Sony Open with a round of 61 11:10
Crossword Get access to over 6,000 interactive crosswords