Gerry Thornley: Leinster v Saracens in an empty Aviva would be a shame

If competitions are to be completed, games may have to be played behind closed doors 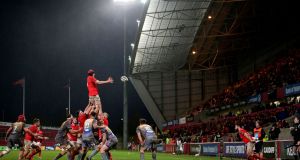 Munster’s Gavin Coombes in action during Friday’s win over Scarlets at Thomond Park: Pro14 organisers have moved swiftly to state that, if there is no other option, postponed games would result in them being declared 0-0 draws, with two points for each team. Photograph: Laszlo Geczo/Inpho

“Events, dear boy, events,” as Harold Macmillan reputedly once said when asked what would determine his government’s fate.

His words proved prophetic in those turbulent times. The Suez Crisis had helped propel him to the leadership of the Conservative Party and the role of prime minister but the Profumo Affair would go some way to ending his tenure.

Well, these too are turbulent times. Events have sure overtaken the sporting world and, with it, the remainder of the 2019-20 rugby season.

There are, of course, far greater issues involved as governments and health authorities try to stem the spread of the coronavirus. But already it seems that, if competitions are to be completed, the likelihood is games will be have to be played behind closed doors.

For the time being, with each passing day, or make that hour, in this rapidly -changing narrative, the Guinness 2020 Six Nations is likely to remain unfinished, possibly for ever more, for the first time since the 1972 season when Scotland and Wales refused to travel to Dublin on account of the Troubles in Northern Ireland.

This had followed Ireland’s wins over France in Paris and England in London. Although France, to their eternal credit, helped fill the IRFU’s void by playing a friendly at Lansdowne Road at the end of April, the cancelled matches were never replayed.

Hence, allowing for the first World War and second World War years, with Wales having won three games out of three, and Ireland two out of two, the 1972 Five Nations remains the only Championship not to be completed since 1898.

Along with Les Bleus again, England, to their credit, did play Ireland in Dublin in the 1973 Five Nations when they were given a standing ovation for fully five minutes after running onto the pitch. Following Ireland’s 18-9 win, the English captain John Pullin famously said: “We may not be very good, but at least we turn up.”

As with the 2001 Six Nations when three Ireland games postponed due to the foot and mouth disease were rearranged for the following September and October, for the integrity of the tournament therefore – not least, it seems, as they contemplate selling the European games’ golden goose to pay-per-view – the Six Nations executive committee will be loath to leave the 2020 tournament incomplete.

Of course, events may still take all this out of the hands of the Six Nations organizers, albeit there is a tendency to overreact to new developments. A case in point was the decree by the French health minister, Olivier Veran, on Saturday prohibiting crowds of more than 5,000 gathering together for sports or other events in “enclosed spaces” in a bid to stem the spread of the coronavirus, which increased by 50 per cent in a 24-hour period in France over the weekend.

This prompted widespread speculation that the France-Ireland game on March 14th in the Stade de France would be called off.

However, although the Paris mini marathon scheduled for Sunday was cancelled, this governmental decree did not apply to all open-air events. So it was that a full round of Top 14 fixtures, and indeed Ligue 1 in football, followed the Champions League meeting between Lyon and Juventus last Wednesday, in going ahead over the weekend.

If it comes to it, even if the Ireland-Italy match and other postponed games cannot be rearranged in this season’s crowded itinerary, they will look at rescheduling them for next autumn, most likely in October.

And, if there are still governmental restrictions in place but it is permissible to play games with crowds of, say, less than 5,000, then there is always the option of playing behind closed doors, even if this is contrary to the very essence of Six Nations rugby matches.

But in this rapidly-changing narrative with regard to the spread of the coronavirus, who’s to say when or even if it will be played one day.

Then there is the threat to other competitions, such as the Guinness Pro14 and the European tournaments. The Pro14 organisers have moved swiftly to state that, if there is no other option, postponed games would result in them being declared 0-0 draws, with two points for each team. This, presumably, was something which the competing teams signed up to as part of the tournament’s rules.

This could give a horribly distorted look to the final Conference tables especially if, as seems distinctly likely, the remaining home games involving Benetton and Zebre are called off. But what else can the organisers do?

Then comes the knock-out stages when, if all comes to worse, games can at least be played behind closed doors, as unsatisfactory as that might be.

At least the Heineken Cup and European Challenge Cup pool stages have been completed. The quarter-finals are in five weeks’ time so there is no compelling need for EPRC to make any pronouncements just yet although no doubt they are monitoring events anxiously.

As things stand, or in other words were the games scheduled for this coming weekend, the two quarter-finals in France – Toulouse-Ulster and especially Clermont-Racing 92 – could proceed as scheduled. So too the all-English affair between Exeter and Northampton.

The quarter-final which looks the most endangered, given the Irish Government’s stance on the Ireland-Italy game, would appear to be the Leinster-Saracens tie.

Rarely has a Leinster home quarter-final capture the attention of the home fans quite like this one, given their team’s regal progress this season but also the controversies which have surrounded the disgraced Saracens.

It’s a guaranteed sell-out and the fervent hope remains that it goes ahead, although conceivably, for this to happen the possibility of it taking place behind closed doors and thus in an empty and cavernous Aviva Stadium has to be considered a real one, which would be a terrible shame.