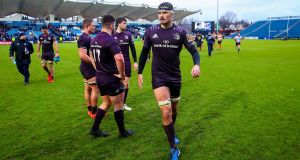 Max Deegan: number eight Deegan, right wing Dave Kearney, scrumhalf Luke McGrath and flanker Will Connors have all been released from the Ireland camp and will line out against Glasgow. Photograph: Tommy Dickson/Inpho

It may be getting tiresome mentioning how Leinster’s winning machine keeps chugging along. Tonight, however, the habit that Leo Cullen and his Leinster team has been feeding all season, could come under threat.

Glasgow, showing their respect for the Leinster monolith as well as their intentions not to come to the Dublin gunfight bearing knifes, arrive with as many international players as they can muster.

D’arcy Rae’s inclusion in Dave Rennie’s match-day 23 means it will be a Glasgow squad containing 15 capped players making the short trip across the water. Five players return to club duty in the second fallow week of the Six Nations Championship.

“Leinster are a good side – they’ve got amazing depth. We’re well aware of the challenge. But we’ve got a good side out on the field ourselves,” said Rennie refusing to defer to Leinster’s home record and winning streak.

That’s about as confident any coach ever gets before bringing a team to Ballsbridge and Cullen should take Glasgow’s note of defiance to heart as Leinster line out with several names that have been thrown into the mix about who should and shouldn’t get an opportunity in Andy Farrell’s Irish squad.

The backrow of number eight Max Deegan, already capped this year, Josh Murphy at six and Will Connors at openside is a reasonable starting point to trigger that discussion again.

Leinster’s rolling system of giving everyone pitch time has worked to perfection so far and there’s no reason to begin to second guess the depth of their squad. To that end, Cullen has retained seven of the team that won away from home against the Ospreys in the Gnoll.

Scott Fardy captains with two players from the Leinster Academy starting alongside some of the players released from the Ireland set-up. One of those who has become a person of interest is lock Ryan Baird.

The 20-year-old, who has played six times for Leinster, was impressive off the bench last week and for that is rewarded with a start beside Fardy. Right wing Dave Kearney, scrumhalf Luke McGrath, Connors and Deegan are the four players released from the Ireland camp.

Felipe Contepomi this week said that Glasgow had a poor start to the season but have stirred in recent game. He added that the Scottish club and Leinster have developed a strong ongoing rivalry.

Cullen’s innocent remark in May of last year about Glasgow having Rangers fans follow them and Leinster being more attractive to Celtic may have made that more enduring than he wanted.

“It’s nice to welcome back a handful of international boys,” added Rennie. “We’ve got a lot of experience in the side with eight centurions in the 23, that level of experience combining with our young guys is good for the club.

“We’ve got a game that can trouble anyone – it was a great game over there last year and we know we’ll have to be at our best to get the better of them in Dublin.”

It is a repeat of last year’s league final with 12 straight wins and a clean European record on the line for Leinster. Glasgow were the last team to win in the RDS in April of last year with five tries contributing to their 24-39 victory. Curiously the Kearneys, Rob and Dave scored two tries each, while Glasgow brothers Zander and Matt Fagerson scored one try each.

There’s just Dave and number eight Matt up today. But either way Rennie and Glasgow are bringing the fight to Dublin. The Leinster winning streak is about to come under threat.