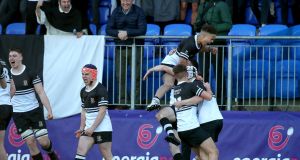 Newbridge College players celebrate at the final whistle after their victory over St Michael’s College in the semi-finals of the Bank of Ireland Leinster Schools Senior Cup semi-final at Donnybrook. Photograph: Bryan Keane/Inpho

This could well rank as the biggest shock since Newbridge last won the Leinster Senior Cup in 1970 as they dethroned the reigning champions to set up an all-Kildare final against Clongowes Wood on St Patrick’s Day at the RDS.

The last time the Kildare school made the final, it was merely to confirm the status of Blackrock’s Dream Team in 1996, and this appeared to be their role as this St Michael’s crew were just two steps away from going back-to-back for the first time.

Newbridge even lost their openside Conor McGroary to illness and this compromised their intention to slow St Michael’s at the breakdown.

It would have to be a collective effort there, Donough Lawlor, Marcus Kiely and Luke Dunleavy driven back in the opening movement and wing Donal Conroy going out on the full to cede possession to remind them of the scrap it would be.

It wasn’t all about the holders, Lucas Berti Newman snatching a turnover and Diarmuid Mangan pulverising Jack Guinane in a tackle.

Newbridge were in a deep hole before they knew it, wing Henry McErlean stepping into Sam Prendergast’s passing channel to snatch an interception try from 60 metres, with Chris Cosgrave converting in the fourth minute.

Then Mark Dennis took Cosgrave out in the air and Newbridge were temporarily down to 14 and hanging on as Conroy hammered McErlean into touch.

The pressure was growing, Lee Barron’s leg drive helping to churn out bonus metres in contact and, from a subsequent lineout, the hooker drove over from a lineout for Cosgrave to double the difference in the 14th minute.

It was a long way back from there, diminutive centre Berti Newman starting the comeback by ripping the ball away in the shadow of his posts.

Captain Kiely was just the man for the hard yards, working beside Berti Newman’s mercurial moments, collecting Prendergast’s chip and anchoring an attack which led to Prendergast’s penalty in the 32nd minute.

There was precious little to suggest the dramatic turn of events that would evolve over a sublime second-half show.

Outhalf Prendergast got his hands free in a sneaky half-break for Berti Newman to race on, finding Cormac King in support for a fine try, Prendergast’s conversion making it 14-10 in the 40th minute.

Loosehead Jack Boyle ate up the ground for 30 metres and hooker Barron was stopped short before scrumhalf Fintan Gunne went close, Cosgrave landing a penalty as an acceptable consolation.

At the other end, Kiely steamed through a defender and Lawlor showed the same authority, prompting Barron’s big hit to deny Kiely before Prendergast slotted a penalty in the 50th minute.

It was then Conroy grasped a high ball and flew through a staggered defence to have enough speed to resist the closing Cosgrave to help Newbridge take the lead for the first time.

Then, Patrick O’Flaherty was binned for a tip-tackle on Eddie Kelly and the St Michael’s wing made the most of the extra room to twice get away down the right, scoring in the 58th minute.

If it had the look of a turning point, no one told Newbridge. Kiely and Lawlor made valuable metres and David O’Sullivan put the foot down for Prendergast to convert in the 62nd minute when still down to 14.

From there, Newbridge held their discipline to end St Michael’s reign, not by chance, but by being the better side.