Ireland get green machine back on the road 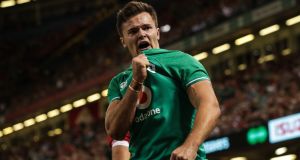 That was a little more like it. Ireland restored a degree of confidence and momentum from what was a much more hard-earned win than looked like being the case when they led 22-3 going into the final quarter, but they got there in the end.

True, they lost their way in that final quarter when the Red Dragonhood finally starting breathing some fire. But although Ireland were eventually pierced twice in the last quarter, the defence was better, much more physical and just as importantly, it seemed, there were no injuries.

Admittedly Ireland were indebted to their scrum, which yielded a high return of penalties and a penalty try. Granted, the Welsh scrum was somewhat undercooked, with a 21-year-old debutant at loosehead in Rhys Carre, thus securing the Saracens bound, English qualified prop.

In other respects, the Welsh bench made the bigger impact, especially Rhys Patchell, who assuredly secured the role of back-up to Dan Biggar after Jarrod Evans’ mixed first 40 minutes. And by the end, Wales’ fitness looked the stronger and despite a defeat in his final home game, Warren Gatland will be every bit as pleased as Joe Schmidt.

Furthermore, this does not erase memory of last week’s beating by England, and it also has to be viewed in the context of Ireland facing a decidedly experimental Welsh side as opposed to a near full-strength English outfit.

In the first-half especially, no-one benefitted from the ensuing difference more than Jack Carty, who worked off a supply of front-foot ball compared to the slow back foot possession Ross Byrne was afforded in Twickenham. Carty wasn’t perfect, getting caught in possession behind his gain line once and missing two kicks which weren’t easy, but he was assured in that first half and provided an attacking spark even though Kieran Marmion’s service was off colour. But as with Ireland, Carty will rue the way his side lost control.

No-one added more of a reassuring presence than James Ryan, and no-one also did more to up Ireland’s line speed in defence. In tandem with Iain Henderson, another defence leader, he gave Ireland a really dynamic second-row. Schmidt had targeted the set-pieces and the lineout also delivered.

In a solid Munster front-row, David Kilcoyne was immense and in a less familiar number ‘7’ jersey an all-action Peter O’Mahony was unrecognisable in his hour on the pitch. Bundee Aki was full of running intent and always a threat, whereas Chris Farrell was quieter. Andrew Conway looked sharp, and Will Addison was polished at the back, albeit he didn’t make it to the hour mark, while Jacob Stockdale, as he does, scored two tries.

Under a closed roof, there was early encouragement for Ireland in assured starts by Carty and Addison. A strong scrum earned a penalty, and a safely secured lineout led to Stockdale taking the ball up at pace from Carty’s inside pass. And when Josh Navidi was pinged for going off his feet Carty confidently struck the straight 40 metre penalty between the posts.

Evans drew Wales level after his cross kick beat Stockdale, who’d have been better covering across, before Addison tackled Owen Lane. O’Mahony was penalised for not releasing and Evans kicked the points.

Schmidt won’t have been amused to see Addison tackled into touch on the counter, but would have been altogether happier with his subsequent high take and what followed. Kilcoyne burst onto the ball, swatting through the tackles of Navidi and Samson Lee to burst up field. From the recycle, Carty attacked the line and freed his hands to link with Conway from his superb insider trailer run. Conway broke clear and slalomed inside before giving Stockdale a straightforward finish. Carty landed the touchline conversion for a 10-3 lead.

After Evans skewed a kickable penalty from 35 metres, instead of seeing their lead trimmed to 10-6, Ireland extended their lead to 15-3. It was a tribute to their improved defence, as Wales trucked it up and then went wide where Aaron Shingler’s one-handed offload in a tackle by Farrell inside halfway fell behind Lane.

Stockdale was onto the ball in a flash, poking it ahead and gathering on the bounce to fend off Hallam Amos and touch down. The Ulster winger thus again demonstrated his uncanny capacity to turn chances into tries, although Carty missed the conversion this time.

There was another feather in the defence’s collective cap when James Ryan and John Ryan drove Adam Beard back in the tackle and O’Mahony was over the ball as Bradley Davies was penalised for holding on. O’Mahony backed that up by alertly reclaiming loose turnover ball on the deck and although Ryan couldn’t hold onto his loose pass, the Munster man was soon underlining his skill set when supporting Aki’s break and flinging a long pass out to Farrell, who in turn gave Stockdale the chance to show his elusiveness.

The half ended with the Irish scrum dismantling the Welsh pack but, alas, Carty was just wide with the 45 metre penalty.

In that first period, it was a measure of Ireland’s improved organisation, line speed, communication and just sheer bloody minded intent that they missed just four tackles as against Wales’ 20. Also, Kilcoyne carried for more metres than the entire Welsh backline.

With a Gatland/Shaun Edwards flea in Welsh ears, and changes at outhalf and both props, Ireland’s defence was twice threatened by the home side’s offloading out wide early in the second half. The visitors were indebted to a James Ryan intercept and Marmion winning a turnover penalty, before a lost lineout led to Garry Ringrose, a blood substitute for Addison, tackling Patchell into touch.

Despite the introduction of Rob Evans and Lee Brown at half-time and then the arrival of Andrew Porter for Kilcoyne at loosehead, Ireland’s scrum powered through for another penalty.

Carty found a fine touch, and Ireland upped their intensity through a power play, but Conway called for a wide ball and then Farrell, unusually, lost the ball in a hit by Patchell.

The raft of replacements early in the third quarter put this game’s worth in its true perspective, but with the introduction of Rory Best and Tadhg Furlong, that hardly weakened Ireland scrum pressure. More pressure from that set-piece led to a yellow card for replacement tighthead Leon Brown and earned three attacking put-ins.

From the first, disappointingly, Carty’s skip pass to put Conway over in the right corner was rightly adjudged forward by Romain Poite. From the second, with an advantage, Ireland went wide where Addison’s poor chip for Dave Kearney instead found only Lane. From the third, the Irish pack went for the jugular and Poite marched under the posts to award the penalty try.

Schmidt won’t have been happy with Ireland’s game management from the kick-off, when the Connacht halves worked the ball to Conway behind the gain line and he was penalised for holding on. Ireland held up the subsequent line-out maul, and good work by the cavalry, notably Henderson, Beirne and O’Mahony, forced a turnover. But two more extended defensive sets followed, and while Ireland withheld the first, eventually they were out-flanked when Dave Kearney shot up but couldn’t cut off Scott Williams pass and Lane stepped back inside Carty and Luke McGrath to score.

Patchell converted and was soon punting another penalty into the corner. Elliot Dee peeled around the blindside but Ringrose’s tackle and McGrath’s covering did enough to force a spillage as the sub hooker reached out for the line.

That could have made things very squeaky. Instead Ireland’s scrum earned a relieving penalty, but when James Davies was forced into the air to reach Adam Beard’s loopy pass and was hit by Aki, although Ringrose picked up and ran on to touch down, on referral to the video Aki was penalised.

Ireland competed and disrupted another Welsh lineout maul, before withstanding a close-in battering. But they couldn’t keep Wales remorseless pick and jam barrage at bay off a five metre scrum, as Patchell stepped inside Ringrose’s tackle to score. His conversion made it 22-17.

It needed Ringrose to atone by forcing Amos into touch on halfway to stem what was now a red tide. Ireland were looking battered, with a hobbling Carty patrolling the backfield. But with the scrum put in, they were finally safe.

Next Saturday could be a full metal jacket affair.