Former Ireland international to be appointed by Rassie Erasmus, according to reports 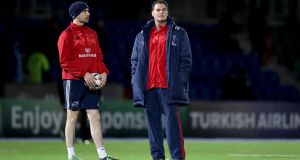 Felix Jones and Rassie Erasmus during their time together at Munster. Photo: Dan Sheridan/Inpho

Former Irish international Felix Jones is set to be named as the Springboks attack coach for the Rugby World Cup, according to reports in the South African media.

Swys de Bruin previously held the role but recently resigned due to personal reasons and it looks now like head coach Rassie Erasmus is set to bring Jones on board having previously worked with him at Munster.

Jones – who made 15 Test appearances for Ireland – left the province earlier this year and is now expected to join fellow former Munster colleagues Jacques Nienaber and Aled Walters on the Springbok coaching ticket.

Erasmus yesterday named his 31-man squad for the upcoming tournament in Japan with captain Siya Kolisi looking likely to be fit for when the tournament begins next month.