Gerry Thornley: RWC dreams will be sealed or shredded in Cardiff

It’s Wales’s last home game before Japan, and Ireland’s shot at some redemption 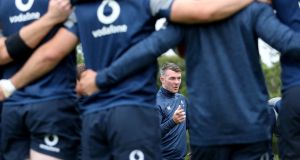 As mere footnotes in history go, this has a fair amount riding on it. It’s Warren Gatland’s last home match in charge and Wales’s last home game before the World Cup, in front of a 66,000 sell-out crowd, and, to add to the fervour, the roof will be closed. Hemmed in, then, it’s also Ireland’s shot at redemption and an opportunity to generate some badly needed momentum.

Just as pertinently, it is the final audition for a host of World Cup aspirants. In this category are the Munster frontrow, Tadhg Beirne, and the Connacht halves, Chris Farrell, Andrew Conway and Will Addison.

Meanwhile, Gatland will be keeping a particularly close eye on his two props, locks, free-running outhalf Jarrod Evans, the fit-again Scott Williams after a year out of the team and the back three, and notably the two 21-year-old debutants, loose-head Rhys Carre and winger Owen Lane.

Gatland’s comments on the age profile and form of the Irish side can also be interpreted as a deliberate means of upping the ante for his own players as well. World Cup dreams will be sealed or shredded this afternoon.

Similarly, although his words would never be so provocative, Joe Schmidt wants Wales to provide his team with a meaningful test “across the board”. Interestingly, though, when asked where, the Irish head coach started with the set-pieces.

Of the many unknowns in this game, the Saracens-bound Carre could be anything after starting just three games for the Blues and losing 10kg since joining the Welsh squad for pre-season. But Schmidt welcomed the presence of the experienced Samson Lee, whose 40 caps makes it an all the more credible test at scrum time for David Kilcoyne and Niall Scannell.

Schmidt also reckons Wales will test Ireland’s defence out wide through the playmaking and passing range of Jarrod Evans, Owen Watkins and Williams, as well as their own running threats through the middle. “I think they will test that backline defence,” ventured Schmidt. “We’re going to need to be better connected and deliver there.”

Whereas Jarrod Evans and Rhys Patchell are likely to have a half apiece, with no specialist outhalf cover, ideally Schmidt would like to see Carty play all or most of the full 80.

Having Kieran Marmion inside and Bundee Aki outside should help. Carty will be wearing the Irish number 10 jersey for the first time after five caps off the bench on what is his 27th birthday. All the family will be there in force for what is a momentous double-header, as younger brother Luke (21) will be playing for the Connacht Eagles against the Ospreys As in Bridgend at noon.

Acknowledging this is probably the biggest game of his career, Carty said: “Wales play really, really direct. So first and foremost I’ve to make sure I get my body out in front of tackles and in front of men; putting in tackles, which is something I was happy with last week, so I’ve to continue that.

“The way they play with their back-field, space will be at a premium. So try to find space wherever that may be. Then just to not burn forwards’ diesel and find space in the back-field, alleviate pressure when I can.”

Strictly as an aside, a Welsh win would see them retain the world number one ranking they earned a fortnight ago by beating England. Rather fancifully, were Ireland to win by more than 15 points, they’d assume top spot, while anything in between would see New Zealand return to the summit.

Wales have won 15 of their last 16 matches, and are on an 11-match winning run at the Principality Stadium, dating back to a 33-18 defeat by the All Blacks in November 2017.

Ireland have lost on all three Six Nations visits to the Principality Stadium under Schmidt’s watch, although they did win here in a World Cup warm-up match by 35-21 four years ago.

Another one would not be especially significant compared to, say, that crucial World Cup opener against Scotland, but given that game’s proximity in three weeks’ time, and the events of last Saturday, it would be timely.

Normally, when it comes to a test between the strength in depth of Welsh and Irish sides, it’s tended to favour the latter. Granted, these don’t seem like particularly normal times.