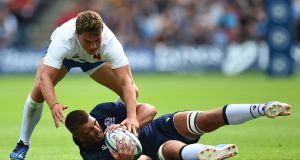 Scotland lock Sam Skinner has been ruled out of next month’s Rugby World Cup after injuring his hamstring in last weekend’s win over France, Scottish Rugby said on Tuesday.

Skinner was helped off the pitch after 65 minutes into Scotland’s 17-14 win at Murrayfield on Saturday. The Exeter Chiefs secondrow later had scans that confirmed he would not have enough time to recover ahead of the tournament in Japan.

“Skinner had the muscle scanned at Spire Murrayfield Hospital on the evening of the match, with the time taken to recover deemed insufficient to play a meaningful part in Scotland’s Rugby World Cup 2019 campaign,” Scottish Rugby said in a statement.

Glasgow Warriors secondrow Tim Swinson, who has 38 Scotland caps, has been called up as cover. Scotland’s Pool A campaign begins on September 22nd when they take on Ireland in Yokohama.