Hayden Hyde primed for next step in Ireland journey 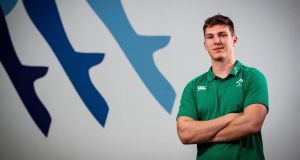 Ireland’s Hayden Hyde is set for his debut in the Under-20s Six Nations this Friday. Photo: Ryan Byrne/Inpho

Hayden Hyde isn’t afraid of change because it’s been an integral part of his young life to date. The 19-year-old centre is set to make his debut in Ireland’s opening Under-20 Six Nations Championship match against Scotland at Musgrave Park on Friday night (7.15).

Born in Kingston-upon-Thames, educated at Cranleigh School in Surrey, he is a former member of the Harlequins academy who has previously represented Ireland at Under-18 and Under-19 levels and last July moved to Belfast to join the Ulster academy.

A catalyst for his decision to relocate was Munster’s Sammy Arnold, another former Harlequins academy and Cranleigh pupil, whom he consulted ahead of the move. He explained: “I spoke to Sammy a fair bit before coming over and after as well because our coach Andy Houston (director of rugby at Cranleigh) knew him really well.

“He (Arnold) was a big influence in (me) coming over. He talked me through the whole process and the pros and cons of it as well. Obviously you have a lot more opportunity with a smaller player base. You have really, really good, high quality coaching on top of that as well. It is really nice to have someone out there who knows the process.”

Hyde’s mum (nee Nolan) is from Tallaght where he was a regular visitor over several Christmases. His Irish heritage included running the gauntlet at school in wearing a green jersey. He smiled: “There were a few words here and there about it but it wasn’t too bad.”

He was a secondrow at Under-16 level before moving to the backrow the following year and playing number eight; from there he transitioned to centre. He was approached to play for the Ireland Under-18 Schools and Clubs, having been involved in the Exiles set-up the previous summer. “I think I was 16 or 17 at the time. I did it because I enjoyed playing in it and there was the idea of playing for Ireland in the background.

“I had a decent few games off the back of that. (Former Irish centre) Kevin Maggs gave me a phone call about a month later off the back of that and said, ‘you have been picked to play against Portugal.’ I was really shocked at that point but then after that it was about trying to get a few good performances and just try and get your name out there.

“Obviously you don’t want to put all your eggs in one basket and be like, ‘I have to play for Ireland, I have to do this.’ It’s been a big dream of mine but it was just really nice to be able to do it and make it a reality.”

England came calling. “I got picked for an (English) training camp around the time of my A levels. I was already with the Ireland 19s at the time, so I just declined. For me it was always Ireland, it’s always been that way.

“It is not to bash the English system, it’s just Ireland have always been the one that’s been there from a very young age. You think, ‘I could stay (at home) if I play with England, it would be more comfortable but (for me playing for) Ireland has always been the thing I wanted to do so it was an easy enough decision to make.”

Prior to going off with concussion, the six foot three inch, 15 and a half stone centre Hyde was a standout play for Ulster A in their Celtic Cup final defeat to Leinster. He admitted: “Senior rugby was a bit of a shock at first; the physicality was huge. When you get a few games you get a bit more comfortable with it. It was just nice to have a good game on a big stage like that; biggish. I watched the footage back and I was solid enough, I was really happy with it.”

He’s enjoyed the Fota Island training camps with the Irish 20s but now the sole focus is that first match against Scotland. “It’s a big part of a young player’s career, a huge stage to be playing on. Everyone is really excited.”