Interim Italy head coach Franco Smith says that the challenge facing him is to integrate some of the young talent coming through into Italy's senior squad while also being competitive in the upcoming Six Nations. Video: Six Nations 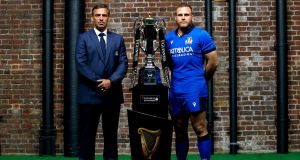 Saturday February 28th, 2015. Barack Obama was still in the White House, nobody knew what Brexit was and Ireland were still adjusting to life in their first full year without Brian O’Driscoll. It was also the last time Italy won a match in the Six Nations, as they edged Scotland 22-19 at Murrayfield. The Azzurri have had 22 bites at the cherry since, and they are still without a victory - a pretty abysmal record for one of rugby’s supposed Tier One nations.

Their World Cup was a bit of a non-event. They registered comfortable, expected victories over Namibia and Canada before being predictably hammered 49-3 by the Springboks - a side they had beaten in November 2016 in vastly different circumstances. Their tournament came to a premature end after the final pool fixture against the All Blacks was cancelled due to Storm Hagibis, a decision which robbed them of the chance to test their mettle against the word champions but also saved them another thrashing. Conor O’Shea stepped down from his role as head coach in November, ending his contract six months early, and he will join the English RFU as director of performance next year. South African Franco Smith is at the helm on a temporary basis, and with Italy stuck at a crossroads another difficult championship awaits.

Time will be the judge of O’Shea’s three and a bit years in charge of Italy, which came to an end on the wake of his side’s World Cup exit. In many ways O’Shea’s task was a thankless one, as he tried to deliver results in the present while also building for the future and trying to blood new talent in an aging squad. Perhaps the person to really benefit from O’Shea’s tenure will be the next permanent manager, who will walk into a more professional set-up and a take over a squad with a healthy age profile.

In the meantime, Smith will guide the Azzurri into the Six Nations, with the Italian Rugby Federation hoping to have a long-term successor to O’Shea in place by July 2020. The 46-year-old Smith has experience as a player and coach in Italy after spells with Treviso on the pitch and in the dugout, and recently spent four years as head coach of Pro14 franchise the Cheetahs. Along with his coaching ticket of Giampiero De Carli, Marius Goosen, Pete Atkinson and Giovanni Sanguin, he won’t have long to leave his mark and stake his claim for the long-term job. Securing that elusive victory would certainly help.

The unfamilar feel to this year’s Six Nations continues with the captaincy of Italy, with Luca Bigi selected to succeed Sergio Parisse. The cancellation of Italy’s final World Cup match robbed Parisse of the chance to say goodbye on the biggest stage, but he is in line to make one final appearance in Rome when England visit on March 14th. Smith has chosen 28-year-old Zebre hooker Bigi to lead the Azzurri in a post-Parisse world, and he can add to his 24 international caps.

With the Sergio Parisse farewell tour not hitting the road it’s time for Italy’s next long-term backrow to take shape, and Gloucester flanker Jake Polledri is set to be a fixture in the Azzurri pack going forward. The 24-year-old has 13 caps and along with the hard-hitting blindside Sebastian Negri and Braam Steyn -who has switched to number eight - he can help offset the loss of the once great Parisse. Polledri has caught the eye with his consistently impressive performances for Gloucester, including the recent 29-15 Premiership win over Bath, and it is his ball carrying which sets him apart. Quick, balanced and direct, Polledri is a devastating runner - he beat 14 defenders and made 109 metres during a man of the match display against Canada in Japan. If he can translate his fine domestic form into the coming Six Nations then he will be a major weapon for the Italians.

Another year, another wooden spoon. Italy led Ireland 16-12 at half-time in Rome before falling to a 26-16 defeat. They also put it up to a much-changed Wales side after Warren Gatland gambled with his match day selection - it worked as the Welsh won 26-15 at the Stadio Olimpico.

The visit of Scotland looks like Italy’s best chance to end their Six Nations duck - they haven’t won a Championship game in Rome since 2013 - but it’s hard to see anything other than the wooden spoon. Sixth.