For the first time in 12 years Wales are starting a Six Nations campaign with a new head coach, with Wayne Pivac aiming to build on the success of his predecessor Warren Gatland. Video: Six Nations 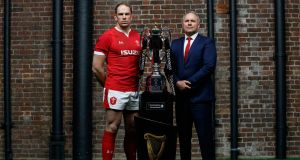 They were so close. Warren Gatland’s golden tenure nearly got the end it deserved, with Wales coming within touching distance of a maiden Rugby World Cup final. Ultimately they were edged out by the brawn of South Africa, losing 19-16 in their Yokohama semi. Gatland is one of the shrewdest operators to ever grace the game but like England in the final, his side were guilty of being dragged into an arm-wrestle with the Springboks, of which there was only one likely winner. The Kiwi has departed to plot revenge with the Lions in 2021 and a new era begins in Cardiff, with compatriot and former Scarlets coach Wayne Pivac now at the helm.

But while Wales are facing into a new era, they do so as defending champions. They won the Grand Slam in style last year with a crushing 25-7 win over Ireland at the Millennium Stadium. Their squad looks to have a nice balance of the old and the new. Pivac has named four uncapped players including flying 18-year-old Gloucester winger Louis Rees-Zammit, while Saracens centre Nick Tompkins could help plug the midfield gap left by Jonathan Davies, who misses the tournament with a knee injury. There is also the fascinating recall for Rhys Webb who is set to return to the Ospreys from Toulon, while Taulupe Faletau is fit again after missing Japan.

Pivac is one of four new coaches making their bow in this year’s Six Nations, and he has arguably the biggest shoes to fill. The 58-year-old Kiwi takes the reins following Gatland’s record 12-year stint in charge, which brought four titles, three Grand Slams and two World Cup semi-finals. Pivac’s challenge is distinctly different to the one which faced Gatland in 2007. Thirteen years ago Welsh rugby was in the doldrums, now they are defending champions and maintaining standards, rather than a rebuild, is the task at hand.

Pivac is likely to bring a more expressive attacking philosophy with him. His flying Scarlets sides were a joy to watch - particularly during their 2016-17 Pro14 winning season - while the departure of long-time defence coach Shaun Edwards could also lead to a greater emphasis on attack. Trips to Dublin and to London mean this championship could be a baptism of fire for Pivac, with a two-Test tour of New Zealand to follow in the summer. However, he has the playing personnel at his disposal to ensure Wales go very close again.

Nobody deserved to lead their country out in a Rugby World Cup final more than Alun Wyn Jones. The 34-year-old continues to deliver age-defying performances but the 2023 tournament is likely to prove a bridge too far, even for him. However there is still plenty of gas in the tank - indeed, Jones made the most tackles out of anyone in Japan with 79, eight more than second-placed Maro Itoje.

Jones’s 134 caps are a Welsh record (and one more than Brian O’Dricoll’s Irish record of 133), while he has 143 Test match caps in total including nine appearances for the Lions. If he features in all five Six Nations fixtures - which is likely as long as the body holds up - then he will level Richie McCaw’s international record of 148. A new dawn awaits, but Pivac’s job is made far easier by knowing he can count on one of Welsh rugby’s all-time greats to leads his side into battle.

The competition in the Welsh backrow is set to be fierce, and there are a number of tight calls for the incoming Pivac to make across the park. However, one player whose starting position is set in stone is Josh Adams, who announced himself to the world in stunning fashion in 2019. The 24-year-old scored 10 tries in 15 Test appearances last year and was the top scorer at the World Cup with seven - ahead of the likes of South Africa’s Makazole Mapimpi (six) and Japan’s electric Kotaro Matsushima (five). Adams has pace to burn outside but he isn’t afraid to mix it physically, his score against England in last year’s Six Nations - when he bullied Elliot Daly in the air - being a perfect example. If Wales can get the ball wide often enough, then Adams will guarantee them tries.

A famous Grand Slam was rounded off with victory over Ireland on the final weekend - but the title was built on a memorable 21-13 win over a cocksure England in Cardiff.

Trips to Dublin and London make a repeat of last year’s Grand Slam look unlikely - they haven’t won at the Aviva Stadium since 2012. However, they have the squad to challenge again, even if they come up just short. Second.