All eyes on Andy Farrell’s first XV, is Finn Russell the victim or simply an eejit? 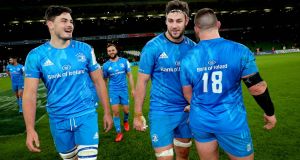 A new look XV for a new Ireland

When Andy Farrell announces the first post-Schmidt-era Ireland XV on Tuesday - scandalously early in the week - three names would signal a new departure.

This was was unthinkable under the previous regime. From the outside looking in, Cooney’s form this season demands inclusion but, either off the bench or from the start, Murray’s response to the threat could be lethal.

Doris, still only 21, looks like the long term successor to Jamie Heaslip but his arrival means alternations elsewhere. Josh van der Flier feels like a certainty at openside, leaving it between CJ Stander and Peter O’Mahony for blindside (Ideally, Max Deegan’s running game features later in the championship).

Hooker would be clear cut if not for Kelleher’s recent hand injury but the 22-year-old’s athleticism is irresistible. Ultan Dillane may block Devin Toner’s return and, at prop, Andrew Porter cannot be held in reserve for much longer.

Returning Porter to his natural position of loosehead can only happen when a suitable tighthead under-study emerges for Tadhg Furlong. In the meantime, Dave Kilcoyne keeps applying pressure on Farrell to drop Cian Healy.

Inside centre remains a tough call between Robbie Henshaw and Bundee Aki. Providing Jordan Larmour is fit, fullback is where he belongs. If injured, Will Addison to get a fully deserved promotion.

Racing 92 beat Castres on Saturday with Finn Russell running all 80 minutes at outhalf. His pose post-victory saw him adopt a defiant bare-chested, gut sucking pose. Or are we witnessing the topless behaviour of an eejit? It’s wide open to interpretation, but Russell appears to be baiting Scotland coach Gregor Townsend.

Forget how important he is to Scottish rugby for a brief moment; 27-year-old drinks too much of a Sunday evening after big European defeat (to Saracens) for primary employers and leaves hotel of secondary employers when challenged about drunkenness, subsequently missing the morning shift at second job. Returns to the city where he’s paid a lucrative salary (primary job) working hand in glove with best pal Simon Zebo who brands him “white chocolate” on twitter.

Russell’s decision to play for Racing rather than perform tackle bag duties in Scottish camp sparked one embedded reporter to note: “There are lots of folks throwing Finn Russell very quickly under the bus because of his alleged behaviour. Best to show a bit of compassion and ask yourself what could be behind his meltdown? I really hope a solution is found.”

Russell liked this tweet before returning to his Parisian sanctuary as Townsend turns to Adam Hastings to play outhalf in Dublin. Maybe Zebo’s twitter innuendo is correct. Maybe Russell’s the innocent victim here.

What remains is an information vacuum that continues to hurt Scottish rugby’s already damaged reputation following a disastrous World Cup that included a £70,000 fine for “collateral damage” comments made by chief executive Mark Dodson during Typhoon Hagibis.

16: The number of the 36 players in Ireland camp in Portugal who did not make the World Cup squad.

“I’m a coach, it’s my passion about putting a plan together and seeing how it works on a weekend. I’ll definitely be doing that, I’ve already made that out to the players. I’ll be taking sessions. I don’t plan to be in this suit too much. I might be at the weekend, I’ve not made a decision on that yet but I tend to be in a tracksuit most days.” - Andy Farrell, Ireland coach.

Ireland’s women get stitched up

The Six Nations launch had 12 captains in national gear with one glaring difference. Unlike all the other countries, the Ireland women’s captain Ciara Griffin was not wearing the same jersey as Johnny Sexton. Nope, the women’s crest is circular, like the male under-20s, with “Women” stitched under the shamrock, presumably as a reminder of gender. You know, just in case.

In 2020 only the IRFU differentiates their men’s jersey from their women.

Meanwhile, veteran centre Sene Naoupu made a point that leans so heavily on common sense we don’t expect to see it becoming a reality any time soon.

“What would it be like if we played in the summer as a separate entity to the men’s Six Nations?” she wondered aloud ahead of Ireland’s return to the 1pm Sunday slot against Scotland, under former Irish coach Philip Doyle, in Donnybrook. “It could increase the commercial support, fans and participation rates as summer fixtures might be more accessible to everyone.”

The women’s Six Nations all by itself in June would remove any need for a costly summer tour and maybe, just maybe, they could be allowed to don the official national jersey.

Irish Olympic hopefuls fly back from Italy amid coronavirus outbreak 14:12
All in the Game: how Firmino’s agent made him faster . . . on his laptop 14:00
Questions raised over Ireland v Italy fixture due to coronavirus 13:53
From stationary carriers to centres of excellence - five things we learned 13:00
Pro14 fixtures in Italy postponed due to coronavirus outbreak 12:57
Here is your handy guide to sport on television this week