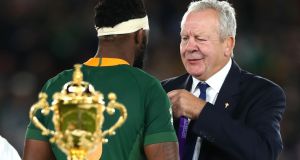 Bill Beaumont is to stand for a second term as World Rugby chairman.

Beaumont, 67, has served as the figurehead of the world governing body since 2016 and has confirmed he will be up for re-election in May, with French Rugby Federation (FFR) president Bernard Laporte as his vice-chairman candidate in place of Agustin Pichot.

He said in a statement: “Having consulted with my union and region colleagues and my family, I can confirm that I will be seeking re-election as World Rugby chairman at the council meeting in May.

“I will be standing with Federation Francaise de Rugby president Bernard Laporte as my candidate for vice-chairman. Bernard is a great servant of the game and shares my vision for a strong, sustainable and inclusive game that provides even greater opportunity for expansion and growth.

“Serving the game is a privilege and while we have made great, game-changing progress over the last four years and accelerate into a new decade in excellent shape, there is much work to be done.”

Beaumont set out his priorities, if re-elected, as strengthening “unions outside of the Six Nations and Rugby Championship” as well as women’s rugby, governance reform and boosting “the financial sustainability of the game”.